By Chris Jones on October 12, 2007 in Actors, Post Production, Sound 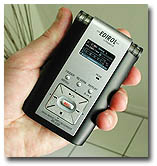 I just spent the morning with our lead actor, Bill Paterson, as we re-recorded the story of how his character Old Bill, caught the biggest pike in the world. In the narrative, this takes place in a car, so we re-recorded it in his car just outside his house. I used my trusty old Sennheiser mic and a small, 24bit Edirol field recorder I bought for £200. I recorded uncompressed 24bit audio direct or a memory card – I bought this Edirol recorder last year for £200 and it has served me well on many occasions.

Bill did ask if we should do this in a proper ADR studio, but my take has always been, why try to recreate the sound of being inside a car in a studio, when you can just sit in a car for real?! It also gave us the time to get it right, without the pressure of an expensive studio. 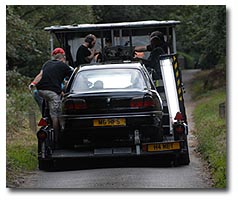 We had decided to re-record this part of the drama because on the day of the main shoot, we were filming in a car on a low and everything went wrong – consequently we fell behind schedule. It meant we were unable to shoot it the way we had planned, and it ended up being a little rushed. It plays OK as it is right now, but this new recording will really improve the timing. It also meant we could tweak the script and add a few lines to match the edit now that we have that in place. Effectively, re-writing the script in post production, a tool I bang on about on my courses.

I am going to Eddies (the editor) cutting room tonight, and we hope to do a picture lock for the next test screening tomorrow night. How exciting!

Sound Mixing your film: Top Fifteen Tips For Working With The Professionals
How to run auditions for casting your film
Nine ways to create a world class sound mix for your film
Working with Actors, interview with Olivia Williams
How To Record Your Own Foley Tracks At Home
Building the 1 Day Course for Gone Fishing
Gone Fishing Get's it's first Fine Cut! And it's AWESOME!