By Chris Jones on January 4, 2008 in Post Production, Sound 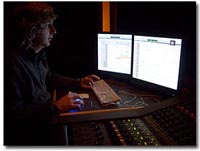 In nearly peed in my pants with excitement as I heard the final mix for ‘Gone Fishing’ It is simply AWESOME!

I have just spent the whole day with a team of audio wizards from Videosonics as all the final audio tracks are mixed into the single surround sound mix. Editor Eddie Hamilton popped in during the afternoon to listen to what we had done, and he was impressed, giving us the thumbs up – which is great as Eddie is used to working on and overseeing the mixes for $50m action movies among other stuff.

Both Bernard O’Reilly and Andrew Stirk worked their butts off all day – in fact, Andrew was in the studio mixing when I got there this morning, and I was already half an hour early. When I snuck away from lunch early to go back and have a listen, he was already there too… In fact I don’t think I ever saw him stop work.

Bernard and Andrew worked together, with Bernard updating, editing and tweaking tracks on one Pro Tools Machine, while Andrew mixed those tracks on another. The system seemed very fast and effective. Most of the day was spent mixing the tracks, making sure every single effect was audible. Of course we spent a huge amount of time mixing the action scenes which now sound like Lord Of The Rings! Huge. Exciting. Bombastic. Funny. Did I mention Exciting?!

We completed the mix around six o’clock and when done, we all sat in the front row of the cinema to listen to our collective handywork. At the end, we all knew that this movie really is something very special. So thank you to everyone at Videosonics who took a good little movie and made it a Great Huge Sounding movie. 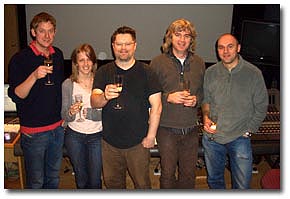 I think most people will be surprised by the scale of the soundtrack. When it kicks in, it really does hold it’s own with any Hollywood action movie. And when it’s sensitive, it’s subtle and beautifully crafted. This dynamic range, not just acoustically, but also emotionally, is what I am most proud of, and most grateful to Bernard and Andrew for helping to craft. You guys are superstars.

The final job was to burn a multi track 5.1 B wav file to disk so that I can now lay these tracks onto the HDCamSR master that we will be showing in a weeks time at BAFTA. A ‘B wav’ is a special audio file that also includes time code for sync purposes which should make dropping them into place very easy.

I also took a copy of the entire pro tools audio project on my hard drive which means that if we need to, we should be able to rebuild the final mix some time in the future.

Only a week to go…

How To Record Your Own Foley Tracks At Home
Dolby Licence is secured for 35mm prints of Gone Fishing
Sound Mixing your film: Top Fifteen Tips For Working With The Professionals
11 Steps Required to record your score with an orchestra in Macedonia – a Guerilla Masterc...
Dragons, Reapers and Guerilla Filmmaking: Turning Writer to Director With My First Short ‘...
Nine ways to create a world class sound mix for your film
The Final Sound Mix Begins!
Six in, one out… 'Muxing' the soundtrack