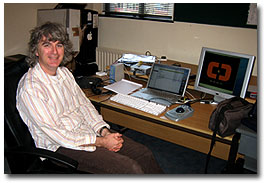 I had a splendid meeting today with Bernard O’Reilly who will be our senior sound designer on Gone Fishing. Bernard works for a renowned company called Videosonics that have done the final mix for many a Hollywood Blockbuster. So to have him and Videosonics onboard is a great coup.

So today, Bernard and I worked our way through the film, discussing ideas on specific sounds, not just foley, atmospheres, spot effects and music, but also on more esoteric ideas to help build a unique soundscape for the poetic narrative of Gone Fishing. There is one major action scene too, which Bernard will fill with a cacophony of ‘crash bang wallop and wiz’ effects… It’s all VERY exciting. We also discussed a few key moments where, for dramatic reasons, we will pull the sound out completely.

In the next few days I will be dropping off some of the original props, such as the fishing reels, so that Bernard can re-record the specific sounds they make when being used. This is one of the reasons why I actually bought some of the mian ‘hero’ props instead of renting for the main shoot.

When we locked picture last week, Eddie created a bunch of files for Bernard, most important of which are a QT of the picture, with burn in’s and also a OMF of all the audio. OMF is a file format that was created by Avid, and it’s like a folder with all the sounds in it, plus a timeline. In theory, Bernard should be able to import it directly into ProTools and all the effects should remain in the right places.

I have got to say it again… IT’S SO EXCITING!

Top Ten Things To Consider When Mixing The Sound For Your Film In A Professional Dubbing T...
How To Record Your Own Foley Tracks At Home
11 Steps Required to record your score with an orchestra in Macedonia – a Guerilla Masterc...
Dolby Licence is secured for 35mm prints of Gone Fishing
Nine ways to create a world class sound mix for your film
Sound Mixing your film: Top Fifteen Tips For Working With The Professionals
The Accounts Are Done!
The waiting game…