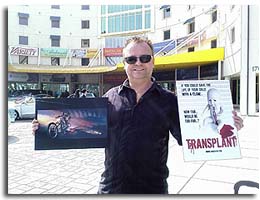 Gone Fishing is still coming along well, but now I must turn my attentions to the BIG project, on eof the main reasons Gone Fishing was made. That is Rocketboy. Producer Ivan Clemments is now at the American Film Market working with a friend of mine, who for political reasons, has to remain anonymous. We will call him Charlie. Ohh how this sounds even more exciting. Here’s Ivan’s report so far…

AFM is a funny beast. It's not like any other place on the planet that I've ever visited. Imagine a gigantic covered meat, veg and fruit market packed with people only they are peddling movies not tomatoes, and you've pretty much got it. I've been coming here now for 4 years and you'd think I'd be used to it by now.

I arranged meetings before I came. My sales agent for my previous film, January 2nd, said that I use his day passes to access the market, saving me a whopping $750 that I would have otherwise have to pay. So it made sense to attend the market again. I would probably not have otherwise.

This AFM is different for me though. I'm here with four projects: ROCKETBOY (RB), TRANSPLANT (Both written by Chris), THE MIX and now I've just acquired the life rights to a football story. So there's a lot going on. My angle is different. Chris and I have decided that we want several projects (slate) on the go. I mentioned to Chris the possibility of slate funding and we are agreed on that course for now. But you know the film business….

I land at LAX at 4pm on Tuesday. I'm off the plane and through customs within about 20 mins as my bag is one of the first out. That hardly ever happens. Then what would normally take 30 mins to get to Santa Monica takes 2 hours because of an accident. LA grinds to a halt. On route I text Charlie, a good friend of Chris' and possible Exec Producer for RB. I can't give too much away as he plans leaving the company he is with right now. Because of his unique position, he's had access to A list producers, directors and talent. And because he's arranging the music side, he's no threat to them creatively. What does this mean? He's their FRIEND!

I arrive and my luxury hotel, Pacific Sands motel. It has 1 star! I don't know how it achieved that status. Even the fleas have moved on. It's like some hick town hotel that you would normally only pay $40 a night for but because of AFM, it's the only one I can afford and the rates are through the roof.

Charlie arrives at 7.45. He's a very unassuming English bloke and I warm to him straight away. I show him the cut of Gone Fishing which he loves. We head out for drinks and a snack and end up at sushi Rocku, a mid ranged sushi bar. Charlie is very excited about Rocketboy potential. He's on our wavelength as well re RB being
translated into an American story and then going after talent and finance with a new script. We also discuss slate funding which he is also very interested in. Charlie is already quietly Execing other projects and in a years time, plans to start up a production company with a backer from the internet business. In the meantime, he's happy to help out on RB.

WEDNESDAY
Up at 4am, what joy. After trying fruitlessly to sleep again, I start ploughing through HCD online (Hollywood Creatives Directory) to fire out emails and make more meetings at AFM. 8am, I'm showered and eating Steak and eggs at a diner 2 blocks away.

9am I go see my sales agent, Phil Gorn. First major bummer is that I can only have the day pass for short bursts as he needs it for other people as well. The other thing I have to keep reminding myself is that all the companies are here to sell, not to acquire projects in development. Those guys are around, but not at the early part of the market.

Most meetings I have are 'pushed' meaning 'go away and come back towards the end of the market when we have time'.

I don't know why this still surprises me. Time for a new outlook. But I'm off to go and irritate people again. Will keep you up to date. There's only real point in reporting interesting news.

One of the biggies is that there is an impending writers strike which means that Hollywood, so it's reported in Screen and Hollywood Reporter, is trying to stock pile projects. But trying to find these execs  milling about is proving tough. Have to find a new angle. VERY FRUSTRATED!! But will keep digging away.

Due to meet up with Charlie again today for more strategy on RB.

ROCKETBOY may be fuelling for take off!
Why story days are essential for your screenplay: Rocketboy redraft nears completion
Pitching Rocketboy
Tomorrow I Fly Out To Finland for the Tampere Film Festival, and maybe the Northern Lights
'Rocketboy' relaunches with a tonal shift that makes ALL the difference
Top Ten Kick Ass Tips For Shooting Action Horror From 'Zomblies' Director Dave Reynolds
The waiting game…
How big is your worm?