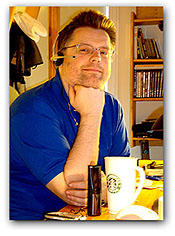 Today has started with a series of interviews for Australian media – and as there is an obvious time zone difference, so I was up at 6.15am talking to down under drive time talk show hosts, bleary eyed with coffee in hand. These interviews are a warm up for The Heart Of Gold Film Festival where Gone Fishing is playing (at the end of March), but also where I am running my Guerilla Film Makers Masterclass (details of the UK based course here on my site, but it’s the new redux version for Oz!)

These interviews were set up by Heart Of Gold’s publicist, Angela Vogt, and really show the value of having someone to handle PR. Great coverage and penetration on a very important local level ahead of time and not post festival which is near useless. In these live interviews, you get the call and the host says ‘Hi, how you doing? So we are on in 30 seconds… Hold please… Boom… YOU ARE ON LIVE RADIO!’ It’s quite a buzz in the moment!

So first was an interview at 6.15am with Cam Young from ABC Coast FM – you can listen to it here, courtesy of Simon Van Der Spoel (one of our Associate Producers – his email he just sent to me below). Second was a print interview at 6.45am with Jannette Parke, a journalist from The Gympie Times (their our local daily paper and big festival supporter) and finally was a scheduled radio interview at 7.45am with Michael Smith, drive time presenter of 4BC Brisbane, a talk back style station, but this was rescheduled for tomorrow as they had a big news story. They were good enough to call me to apologise and arrange for same time tommorrow. Crikey a days work done before most people get to work in rainy London!

I tried hard to name check the festival as many times as I could, which is paramount in these kinds of interviews, as well as talk about the masterclass and the movie. It’s really great doing interviews where the host has been properly prepped by someone, so thank you Angela for a stellar job.

So… if you are in Australia, and you want to come along to the Masterclass in Gympie, or even just come to Gympie to see a host of super shorts, you can sign up on their website here.

OK, so here is the mail I got from Simon in Australia just now…

‘I'm driving along after doing a commercial shoot, and I'm channel surfing on the radio and I come across ABC and here the words "Gone Fishing" briefly before I've moved on…now wait a sec…could it be… I've gone too far on station flicking, have to go around….*hiss* *static*… "Chris Jones…shortlisted…Heart of Gold"…*static*  Up next….Chris Jones!

So I park the car at work, and sit in air-conditioned comfort as I listen to you and the presenter have a chat! And then I get a plug which was a crackup, very cool mate!’

50 Kisses selected for the Rhode Island International Film Festival 2014
How Getting Involved In A Community Film Festival Can Inspire You As A Film Maker
Short film opens doors in LA for Brit Film Maker
Short Films on the film festival circuit, a view from one film maker... Chasing Cotards
Watch the short film that catapulted director of Blade Runner 2, Denis Villeneuve, to the ...
Canon 5D MkII versus Film in the real world… the result?
The Genius In Us All…
Festivals and Sales for Gone Fishing, the Masterclass