By Chris Jones on November 23, 2007 in Post Production, SFX, Software 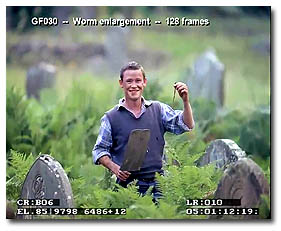 Two were kind of image fixes, removing small cosmetic problems from the shot, but the third was a full blow VFX shot with a worm enlargement. In the story, Old Bill recounts the tale of how he needed the biggest worms to catch the biggest pike. When we shot it, the scene was fine. But in post, we realised we could increase the worm size and make it a funnier gag. If you have been following the blog, you will know we have been following how this shot has passed through film scanning to DPX, import into After Effects and so on. And I am delighted to now ‘premiere’ a quicktime of the completed shot. You can click on it here…

This is of course a low res version and not in the correct aspect ratio, but blimey Russ, job WELL DONE! So good is Russ’ work, I have now sent him three more shots. I will report on his ongoing progress as we get to each shot.

If you are as impressed with this shot as much as I am, drop Russ an email and say… Well done! His email is russ.wharton@btopenworld.com

The ONE thing I needed to get right for Urban Ghost Story... BTS on the stunts
Top Ten Things To Consider When Mixing The Sound For Your Film In A Professional Dubbing T...
Do you love old school practical visual effects and their artists? Rick Baker, Rob Bottin,...
Dragons, Reapers and Guerilla Filmmaking: Turning Writer to Director With My First Short ‘...
How I made a SciFi Epic Film on a shoestring... Making KIDDO
Dick Smith, legendary makeup artist has died, his legacy for me, cannot be underaterd
Rocketboy redraft in the Rockies
World Premiere Date and Venue Set!