By Chris Jones on January 22, 2008 in Negative, Post Production, Sales 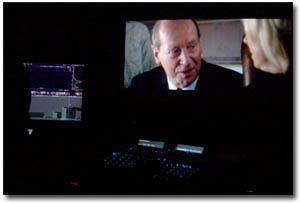 So now we have tow major steps to complete for Gone Fishing.

First is getting it out there, getting the film working for us, especially with regard to things like film festivals, awards, agents, managers, studio executives etc. More on that in the next few days.

The other major step is to complete Gone Fishing from a technical perspective. This is done in three parts – Legal stuff (like the music cue sheet and Dolby licence), picture stuff (like archiving the digital files) and sound stuff (like making a stereo fold-down mix and the Dolby MO disk). Yes I know, propellers are spinning on heads!

Let’s just deal with the picture part for now. Yesterday I went into Midnight Transfer to do a tweak on the titles. I had to recreate the end roller to accommodate some mistakes I made, some were simple spello’s, some were peoples stage names that are different to their real name, and one was to accommodate the Make-up and Hair Department which I had incorrectly credited. That’s now done.

But while I was there with John Claude, we also had a chat about what needs to be done next… Yes I know we have already premiered but there is still loads to do…

Some are just technical hoops, others are tweaks after we saw the film for the first time out ‘in the wild’ as it were last weekend at BAFTA.

Here is a short precie…

1. Final tweaks on the picture grade.

2. Final tweaks on the end roller and re-grade title cards to be true black backgrounds (some of you may have noticed this at the BAFTA screening, I am guessing most didn’t).

3. Re-lay new version onto HDcamSR tapes in 4:4:4 at 24p (these will then be our master video tape versions now)

4. Render out a TIFF stream at HDCam res (1920×1080 res) so I can bring into After Effects and render out a BlueRay picture file.

5. Render out a TIFF stream at SD res so I can make an MPEG2 for DVD.

6. Render out Data for 35mm transfer at the recommended facility for Midnight Transfer (every facility has different specs and so we want to work with who MT recommend). This will give us a 35mm print of the film, unlike the digital version we saw at BAFTA.

7. Final archive of project to either hard drive or tape. This is a short so there is not too much data, perhaps only half a terabyte! On a feature we would be looking at anywhere between 2.5TB and 4TB! Blimey!

8. Collection of all materials including 35mm neg which should go into storage.

And that’s just the picture elements at Midnight Transfer. We will also have a whole separate process at the 35mm scanning company who will make a 35mm negative.

So much still to do…

Selling your movie direct on DVD...
Can AI Topaz Labs SD to HD up-scaler significantly improve old video and film footage?
Dragons, Reapers and Guerilla Filmmaking: Turning Writer to Director With My First Short ‘...
Should you distribute your short on DVD and BluRay? Guest blog from Danny Lacey: 10 things...
Making Feature Films For No Money: How I Made My “★★★★ Intense and Tender Psychological Th...
HD Sound Encoding
Rules, principles and guides…