By Chris Jones on December 11, 2007 in Negative, Post Production 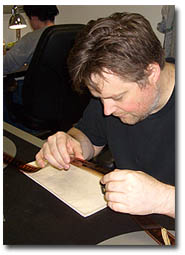 So the final mastering stages of ‘Gone Fishing’ have begun. I popped into the Film Clinic today to have a look at some of the problems we have with a few rolls of the film negative. When it was processed, some of the chemicals turned out to be a little dirty, and all manner of debris was left on the camera neg. Most of this has now been cleaned off, but there is still a little worrisome damage to the emulsion side of the neg where it was rolled up while still slightly wet.

My guts tell me that this won’t be a problem. We will see. I also met with senior grader, John Claude at Midnight Transfer today, and he watched a DVD of ‘Gone Fishing, before we discussed the completion schedule. By now, the neg will have been collected from The Film Clinic and it will be digitised at 2k resolution into Midnight Transfers Baselight (powerful film resolution grading system).

One day next week, I will be going in to MT to do the final picture grade. I can’t tell you how exciting this will be. And it will finally answer, do we have problems with the camera neg or not?

All things being equal, we should have a completed film just before Xmas. The movie will be presented at BAFTA on the 12th in HDCAM SR, so it should look the best it could ever look. We will be doing a film out later.

Dragons, Reapers and Guerilla Filmmaking: Turning Writer to Director With My First Short ‘...
BluRay or HD DVD – Damned if you do, Damned if you don't…
Festival Submissions Begin