By Chris Jones on February 26, 2008 in Negative, Post Production 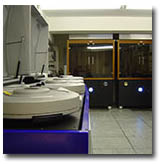 Today I went to Cinesite to meet with the legendary Mitch Mitchell, to discuss how we are going to get ‘Gone Fishing’ onto 35mm. Mitch is a very experienced digital post production guru, who has even written one of the best books on the subject – Visual Effects for Film and Television. Cinesite have worked with Midnight Transfer before, and getting the 300gb of data between the two places is usually handled via FTP over a network. Once the data (that’s the whole of Gone Fishing saved as a DPX image stream) is at Cinesite, they shoot some tests to calibrate the system, and then scan the film onto neg.

Mitch is a refreshingly straight shooter, and we discussed all sorts of stuff. But two things really resonated with me.

First off, we discussed that many new film makers are very unreasonable and unprofessional, making it difficult for big players like Cinesite to help other film makers in the future. It’s just too much hassle. He told me of another company who had the worst experience in their entire company history while helping a new film maker! So guys, we owe it to each other, and those who follow after us, to be professional, organised, realistic, appreciative… Don’t burn other people’s bridges! Don’t you dare!

The other thing that was fascinating was his take on ‘film or digital?’ and how digital is not as cost effective as many producers, even experienced ones, sometimes believe. This is mainly to do with the huge amount of post production support that digital formats need, and on balance, there is rarely very much anything in it financially. So the choice of film or digital should always be made on creative or aesthetic merit, never on budget. Of course this is a different story if shooting on something like HDV, or another prosumer format. But at the top end – HDCam, Viper, Genesis, Red etc., there just isn’t much in it – think about it – making clone backups, managing terabytes of data, overshooting hugely as ‘tape’ or ‘disk space’ is perceived as cheap… Shoot digital if it suits the story. Shoot film if it suits the story.

Cinesite has a short PDF here about scanning out  to film and it  makes an interesting  read for anyone with a big propeller on their head.