By Chris Jones on February 17, 2008 in Uncategorized 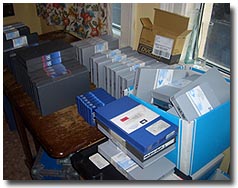 I am on an archiving bender this weekend. I made a movie ten years ago now, called Urban Ghost Story. It was shot on Super 16mm and telecinied ot BetaSP for offline editing. For the past ten years I have been carrying around the rushes on 50 BetaSP tapes. So it’s time to deal with it.

I decided to transfer all the tapes onto around ten, 84 minute DVCam tapes with timecode. I could use a J30 DigiBeta deck which has a firewire port on the back, so it will convert BetaSP analogue to DVCam digital for me.

The first big shock is that the tapes are not in good shape. There is a lot of drop out and the heads of the player need cleaning every few tapes as I guess the tape is shedding particles as it plays. It’s literally falling apart! This really has been a wake up call about archiving old tapes and data. Nothing lasts forever, especially magnetic tape it seems! I have had to reconsider just how ‘secure’ all my other master tapes actually are. Archiving has always been a problem as film making tends to generate a lot of stuff, and I guess, we tend to think of it all being safe and secure in the loft or on a shelf. Maybe it’s not as secure as you think?

The good news though is that after this weekend of tape swapping, what was once three large boxes of tapes will be in a handful of DVCam tapes (and being new tapes they should last another ten years before I guess everything will be disk based anyway). About time too!

Episode two of our Xmas web series goes live with 20k views!
One Create50 horror story of how a writer lost their script… completely
Why Star Wars endures so powerfully... It’s nothing to do with fan boys and EVERYTHING to ...
Tomorrow… Screenwriting Immersion Begins Online at LondonSWF365
Success is so often a mirage, the journey is so much more important than the destination
I think I’m gonna need a bigger notebook! LondonSWF365 exceeding even our hopes...
PAL DVD of Gone Fishing Complete
DIGITAL DISASTER!