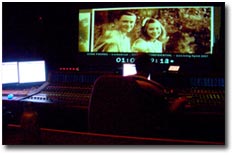 Last night I went back to work on the final mix for Gone Fishing at Videosonics. There were two aspects to what we were doing. First off, there were three small creative changes to the sound mix, things I picked up while viewing the film outside of the studio environment. We changed two and left one the same as before as that really was the best we could get it.  These were very small changes and again, as I said months ago on the blog, it’s wonderful to be able to go back and nudge ‘99.9% happy’ into ‘100% over the moon’.

The second aspect to what we were doing was entirely practical. Backing up gigabytes of data, doing a speeded up version to 25fps, and finally a bit depth conversion, from 24bit sound to 16bit sound. All these versions are really for different media releases, such as PAL TV (which is 25fps), DVD (25fps and 16bit), and BluRay (25fps and 24bit), as well as the original which was 24bit, 24fps which is now encoded for Dolby processing onto an MO disk, and then to 35mm print. Phew!

I have been having problems making an audio stream for the BluRay disk, which in theory can handle 24bit uncompressed sound, which is much better than DVD or what you would hear in a cinema. A good friend of Eddie Hamilton’s and DVD / BluRay guru Richard Osborne has stepped in to help with the audio encoding. I will report in due course on how things go, but the good news is, this probably means we will have a consumer disk of ‘Gone Fishing’ in 1080 HD and the full audio quality at 24bit. Hooooorah!