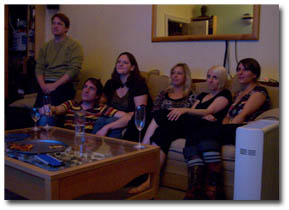 Last nights test screening went very well. Lot’s more stuff discovered. First off, everyone really enjoyed the film and felt impressed by how ‘BIG’ it felt. This is mainly down to the story, photography and music, and also the simple ‘non tricksy’ direction I think. I am very pleased.

But… we still have some stuff to iron out. The killer pike looked great, but water has a weird way of messing around with scale, and everyone thought the pike was too small. Most people were not bothered by this, but I think it’s something we need to deal with. I have re-cut some other shots in now where less of the pike is seen, and more water splashing takes place. It works well too.

We also isolated a line of dialogue that many viewers could not understand. This is a classic one – and why these screenings ARE SO IMPORTANT. Everyone involved has read the script, and so understand the dialogue, and therefore, couldn’t even conceive of why another person might not understand what is being said.

Virgin eyes and ears can often hear something else, and while I still know the line is delivered well from the actor, for some reason, half the people watching didn’t understand what was said. This is in part because the actor was a little nasal, perhaps something to do with the emotional performance, or maybe the mic positions. To be clear. The performance is wonderful and sound is clear.

But… for whatever reason, the audience does not ‘get the line’. I have EQ’d it a little, rolling out some bass, and we will test the film again – hopefully tonight – with these new tweaks. We may go back and re-record that one line with the actor too, trying to get the words more clearly defined.

Blimey, it’s amazing how important these screenings are!

50 Kisses Final Mastering: Making The DCP Part 1
'Swinging With The Finkels', Inspirational Script to Screen with Jonathan Newman
Dolby Licence is secured for 35mm prints of Gone Fishing
Nine ways to create a world class sound mix for your film
Top Ten Things To Consider When Mixing The Sound For Your Film In A Professional Dubbing T...
Gone Fishing Get's it's first Fine Cut! And it's AWESOME!
Test Screening 3 and final roller