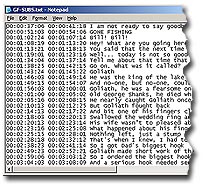 Translating Gone Fishing has turned into both a bigger job than expected, but at the same time, easier job than I feared, mainly due to the incredible help I have received. Subtitle Workshop has proved to be a great little free tool, a little clunky in places, but nonetheless, it does what it says on the tin and is free (I believe a Beta of the new version is out too). Importing files into Adobe Encore has also got its foibles with it requiring text files saved in a particular way (UTF-8), but now I know how it all works, it’s fairly painless.

The best part is, I have been able to send of the text file of the English version and it’s translated by you guys – by just swapping out the English and dropping in the new language in this text file – I can then just check it over in Subtitle Workshop and drop it straight into Encore as all the timecodes are still in place. It’s really very easy once the first transcription into English is done and is all correctly timed. If you are interested in what this subtitle text file looks like, you can click here and read it.

I have decided to do as many languages as possible as Festivals are bound to be more favourable if the film has already been translated. I have also done an English track for the hearing impaired, something I try to do all the time now (a character in Rocketboy is Deaf and I have had some experience now in the deaf community and understand how much subs are appreciated in this larger (than you would expect) group.

Perhaps the biggest problem with translations has been the title, as ‘Gone Fishing’ is kind of a recognised phrase in English that in other languages may not work at all, or just sounds strange.

So for undertaking or checking a translation so far, I would like to thank Daniel Bones, Kerry Finlayson, Sylvie Bolioli, Marino Santirso Ruiz, Katja Gielnik, Steve Wilson, (and anyone else currently working on one too). It really has helped make the film international.

11 Steps Required to record your score with an orchestra in Macedonia – a Guerilla Masterc...
Dolby Licence is secured for 35mm prints of Gone Fishing
Nine ways to create a world class sound mix for your film
How To Record Your Own Foley Tracks At Home
Sound Mixing your film: Top Fifteen Tips For Working With The Professionals
Top Ten Things To Consider When Mixing The Sound For Your Film In A Professional Dubbing T...
Subtitles for Festivals
Makining HDCam Downconvert tapes