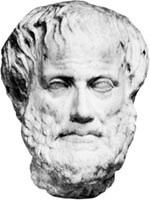 I have been working on my script and reading more and listening to other writing teachers. Aristotle’s name has come up repeatedly, and shamefully, while I knew the broad strokes of his work, I had never read his book on Poetics. Clearly it’s in public domain so I went to the web to find it, and discovered a free download of a reading – so it’s now on my iPod and I am working my way through it.

The most profound bits for me are about the beginning, middle and end.

What resonates most is that I believe that often, I (and having read many scripts I can safely say many others) don’t actually start at the beginning. We start sometime BEFORE the beginning. If we are lucky, this gets addressed in post production when you chop chunks off that are not needed. We usually dress it up as character back story, or the setup, but I fear that most of the time, it’s just dead weight… And it’s not just the script, but every scene has a beginning, middle and end, even every line of dialogue… that’s why in a movie, characters never lock car doors when they park up, the scene ONLY begins when the character arrives and to lock the doors is stuff that happens BEFORE the scene starts – yet we need to establish the location (setting the stage which is something different) thus show the car pulling up.

The original text is pretty hard going I warn you, but if you are into it, there is a free download of the text here… and an audio recording here (in a zip file)…