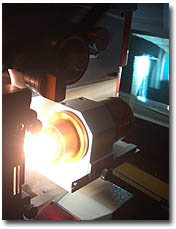 Today I took the 35mm print of Gone Fishing to Videosonics for the guys who did the sound mix to check out. We had previously screened at Cinesite (for picture) where we thought the sound may have been out of sync. After checking today, I can now confirm that there are in fact no problems at all. Sound sync is perfect. Of course a problem we face here is that to check a 35mm print, you need a 35mm projector, and a sound system that can cope with a full cinema mix.

The 35mm print we have carries sound in two formats, Dolby (which is an analogue system) and Dolby Digital which encodes the sound as binary digits. While the Dolby Digital is heavily compressed, it sounds much better than the analogue tracks, and I was pleasantly surprised at just how good it did in fact sound. Plenty of oomph when it mattered the most.

This means that we can now go ahead and get the final show prints made up for Cannes, hopefully on Kodak Premiere film stock, which should increase colour saturation and black densities. I am looking forward to seeing what it looks like.

My blog posts have been sketchy recently as I am moving home, and I am just about to deal with an attic full of 35mm film stock I have from three previous features films! Blimey!

Top Ten Things To Consider When Mixing The Sound For Your Film In A Professional Dubbing T...
How To Record Your Own Foley Tracks At Home
Nine ways to create a world class sound mix for your film
Dolby Licence is secured for 35mm prints of Gone Fishing
Sound Mixing your film: Top Fifteen Tips For Working With The Professionals
11 Steps Required to record your score with an orchestra in Macedonia – a Guerilla Masterc...
Viewing the first 35mm print
The first screening approaches…