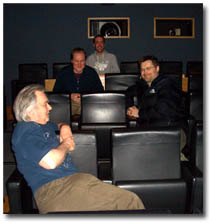 I have just returned from the very first 35mm screening of Gone Fishing – EVER! Even though we shot 35mm, we scanned and post produced digitally, and even premiered digitally. But to get the film out to the ‘world film festival circuit’, we needed a 35mm print. Mitch Mitchell at Cinesite stepped in and did a splendid job (pictured in the front row here, with me on the next, senior grader John Claude third, and finally at the back, projectionist James Breen).

So, we saw the first print today. It was married with sound so it could have been a final show print, but there were a few problems. First off, even though to my eye it looked INCREDIBLE, Mitch and John Claude assured me that it was a little light. I guess I could see it, but it certainly didn’t distract from the splendour. We took a look at the lab report (which you can see here if you are a geek like me – what amused me on the lab report was that the print was described as ‘a touch magenta and a smidgen red…’ You can tell that was from a lab in the photochemical mindset and not the absolute digital world of binary ones and zeros!) The report has two lots of printer lights – the goal lights and what actually came out the other end – we are out of the digital world now and back in the photochemical world where I cut my teeth. Printer lights relate to how much Red Green and Blue is pumped in when making a print. Mitch at Cinesite gave the labs a ‘goal’ light, but as this is photochemical, all sorts of variables can come into play, like the age of the chemicals, temperature etc. As it happens, this print didn’t hit the ‘aim lights’, so we are hoping to do another print.

We also have a bigger problem. The sound was out of sync. Not by much, maybe three frames, but I could see it. So we need to get to the bottom of that too.

Also, we have decided to go the whole hog, and we are going to try and get some Kodak Premiere print stock, which apparently, will look gorgeous… I can’t wait!