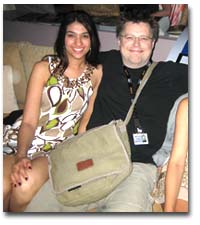 So I landed in a rainstorm and at 10pm was immediately whisked off to my first party at the Century Club on a rainy beach… until 3am (pictured here with producer Ivan Clements sister-in-law). I spent most of the evening chatting to film maker friends and getting the skinny on the market. Apparently, this year it’s a slow market and new trends are emerging. Horror is going out, action adventure is coming back. And feature length theatrical documentary is also gaining a foothold in the market. All very interesting.

Right now I am sat in a private members club, ‘The Hospital’. I have been teaching young film makers at the Met Film School, and I encouraged them to come to Cannes. Expecting only a fe 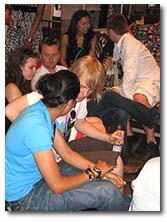 w of them to turn up, I was amazed when 20 made it – and this party at the hospital, is for them (and was arranged by the Met Film School owners). Blimey, they really must have taken onboard some of my comments about understanding how film sales actually works.

I have been promoting the screening of ‘Gone Fishing’ hard and we are hopeful that we will have a capacity screening the day after tomorrow. Feedback on the posters is very good and the strong blue really helps it stand out from all the other posters. I have lots more parties to hit later tonight, and I will also be recording some video for the blog too…

I am delighted that a few of the contributors and crew of ‘Gone Fishing’ have made it down for the screening and the party.

It’s really great to be back in Cannes, and surrounded by so many like minded people, all on their own journeys of doing the near impossible…