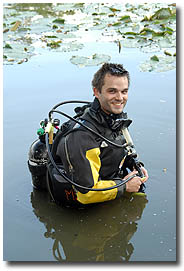 I am now back from Cannes, and I returned to a wonderful email from stunt co-ordinator Jude Poyer. Jude is a very experienced stunt guy, and so we were very lucky to have him involved in ‘Gone Fishing’. His job was to help create the impression of Goliath underneath the water, so he spent a great deal of time nearly frozen to death in the cold waters of the lake! Here’s what he had to say… (I had to edit the content a little so as not to tell you too much about the story of Gone Fishing)

Firstly thanks for inviting me to the Soho screening of "Gone Fishing". I chose not to write until Cannes was out of the way, as I imagined you would be far too busy.

I'm probably not going to write anything too original as I'm sure you've been snowed under by positive feedback. Anyway, congratulations – "Gone Fishing" was beautiful, moving and high quality in terms of writing, performances, and technical execution.

My dear wife, comes from an artistic family, and like me has worked in films, TV, commercials etc (some big budget, some low). She always tells me what she honestly thinks, and she had nothing but praise for the film. From my standpoint, I should also be honest and tell you that I've never been a big fan of shorts. Perhaps I should watch more. God knows how you did it, but in 13 minutes you crafted a story with the set up, climax, gentle (not forced) ending, and created characters I cared about.

It must mean something that for several hours after the screening, and the following day, I kept revisiting "Gone Fishing" in my mind. I watch a lot of feature films, and most don't have that effect on me.

I do imagine that "Gone Fishing" will convince producers/investors that you are up to the task of directing a commercial big budget 35mm feature film.

So that's enough analysis from me. You made a stuntman literally fight back tears with your 13minute film. So well done. And thank you, because even though my involvement was minimal, it is nice to have played a small part in a production I can be proud of.