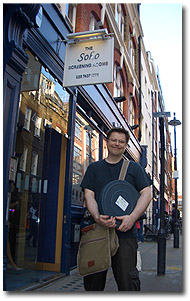 To say I was nervous would have been an understatement.

Yesterday was the key screening of ‘Gone Fishing’ for Producer Marc Samuelson, the screening that we had been aiming at for the last year. Gone Fishing was produced to show Marc just what I could do as a director, so it was all riding on that 5.30 slot at Mr Youngs in Soho.

With the movie under my arm, I arrived at Mr Youngs an hour early, just so that I could check the print, which looked great and sounded awesome. So now that all tech checks had been passed, I could relax into the event. Aside from Marc attending, there were a few other people involved, such as Audrus (digital matte artist) and Jude Poyer (stunt co-ordinator), plus a few long term movie friends.

I chose not to sit in on the screening as I think it makes it a bit awkward for a critical audience if the director is sat next to them. So I paced nervously up and down outside theatre one  while the movie played… then before I knew it, the end title music played and I held my breath… and no-one came out… so I went in and was greeted with a round of applause.

People started milling out and the vibe was very very positive. Marc lingered inside and I went over and asked the multi-million-dollar-budget question… ‘so what did you think…?’

He smiled and we chatted for five minutes… he used words like ‘beautiful’, ‘incredible’, ‘wonderful…’ and then he suggested we meet as soon as possible before Cannes.

So the movie did what we hoped it would. Of course, it wasn’t produced for Marc alone, and in time, many many other producers, agents, managers, actors, distributors… will see it, and who knows what doors will open. But Marc was the catalyst, and the first pair of hard and critical industry eyes to see the film with no knowledge of the content.

So thank you to everyone who helped in the crew, helped with cash, or was just a supportive voice when needed most… Together WE DID IT!

So now it’s all guns blazing on the full exploitation of Gone Fishing and the drive for Rocketboy! The next milestone for 'Gone Fishing' is going to be the Oscars in 2009… Blimey…

George Romero dies and we lose a legend... Watch the Making Of The Classic 'Dawn Of The De...
Why Star Wars endures so powerfully... It’s nothing to do with fan boys and EVERYTHING to ...
‘50 Kisses’... and the winner is...
One Create50 horror story of how a writer lost their script… completely
Tomorrow… Screenwriting Immersion Begins Online at LondonSWF365
Today is the day…
Cannes-a-go-go-go!