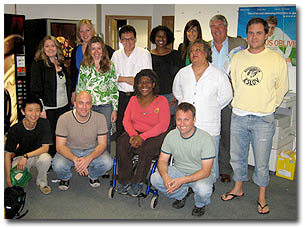 Having spent a little time over the last few months teaching young film makers in a longer and structured curriculum, it was really GREAT to be in a room with a bunch of people who really wanted to be there, had paid for it, made time in busy lives, and so damn it, they were going to get everything they can out of it! It really confirms in my mind that for some people, the best way to approach education in a vocational career like film, is through short, intense and stimulating short courses. The difference in the group is quite astonishing and really great to be involved with as a teacher. 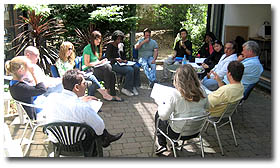 It was so successful that Zee has now committed to bringing it back again next Summer. Anyway, here are a few comments from the seminar, I am sure more will follow…

‘Motivating… I now have an energy battery bunny burning in my brain to do it!!!’
Maria, TV Presenter and Doc Film Maker

‘High energy and a great sharing of knowledge by experts in thief field’
Romilla Ready, Doc Film Maker and Author of NLP for Dummies

‘It was really inspirational and refreshing to be around people who were saying that things were possible, and offering encouragement as well as practical advice. It was full-on…!’
Harriet Shawcross, Lecturer in Film and TV

‘50 Kisses’... and the winner is...
12 ways to rewrite your British written spec script so it sells in Hollywood
Announcing The Successfully Selected Writers and Stories for Twisted: Ghosts of Christmas
Tomorrow… Screenwriting Immersion Begins Online at LondonSWF365
George Romero dies and we lose a legend... Watch the Making Of The Classic 'Dawn Of The De...
Oscars Eligibility Screening Is Booked
Indiana Jones and the Theatre Of Doom!