Today, the paperwork folders (that I designed and uploaded last week) arrived in record time from Vistaprint, and I have to say they look terrific. I have wanted something like this for many years as I always felt that if you are going to send any kind of paperwork, it makes a big impression if it comes presented with some professional flare. And these folders are bright and glossy.

I also received my two large 3cm deep granite blocks for putting under my two main speakers in my home cinema system. The speakers are floor standing ones and mounted on floor spikes. So I did some tests. I listened to some rock music at around 70db, which to my ear, was loud without being too dominating or extremely antisocial. It sounded pretty good as expected.

Downstairs in the flat below, with no traffic on the street or planes overhead, I was getting around 30db – and it was definitely quiet and very pleasant. When the music was playing, I could hear it clearly and even understand the lyrics, though it was muffled. With the music it was hitting about 35db with the music – a 5db increase. 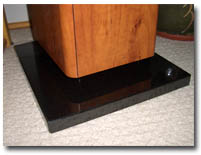 After I put the speakers on the granite bases, the first thing that struck me was that the music was much tighter. The bass was not booming as much and it had become much crisper. It definitely sounded better.

Downstairs, the bad news was that it made no impact on the sound at all – it was the same 35db and sounded to my ear about the same. This also indicates that much of the sound that leaks down is airborne, and therefore, soundproofing, will deal with it very well.

So for now, while mounting speakers on granite plinths will definitely improve the acoustic qualities of your speakers, it won’t do much at for the neighbours.

The Guerilla Filmmakers Masterclass: The Final Chapter... Come for just £69
Screen to Screen on Soho Radio with Chris Jones... A musical odyssey
Announcing The Successfully Selected Writers and Stories for Twisted: Ghosts of Christmas
Why Star Wars endures so powerfully... It’s nothing to do with fan boys and EVERYTHING to ...
I think I’m gonna need a bigger notebook! LondonSWF365 exceeding even our hopes...
Printing the final DVD inserts
Music Cue Sheet