By Chris Jones on June 6, 2008 in Uncategorized 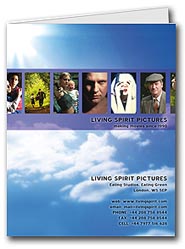 The big PR push for ‘Gone Fishing’ is now starting. We have been to Cannes and now that is over, we are going to focus on première festivals and competitions.

One of my observations about short films that come to me (because of The Guerilla Film Makers Handbook I get sent lots of shorts) is that often they are quite badly presented. There really is no excuse for a DVDr that is hand scrawled in marker pen as a cheap on-disk printer is only £50 now. The same is true for paperwork, and so I decided to go ahead and brand everything connected to both ‘Gone Fishing’ and Living Spirit Pictures – I am making an A4 full colour paperwork folder with Vistaprint, to hold loose papers, application forms, press packs and business cards. They will costs about £100 for 250, which is more than enough for now. And the DVD cover is hot on its heels, but more on that in due course.

On another note, editor Eddie Hamilton has just been doing a re-cut on my friend, Jonathan Newmans short film, ‘Meet The Finkels’. This reshoot was done using the Red One camera with prime lenses and here is what Eddie had to say about it…

‘Watching the "Wanted" trailer in the cinema, and how amazing it looked having been shot on the Red camera and transferred to 35mm, we tried using the camera on a short at the weekend. It's great to use, but most importantly for low budget filmmakers, you can take the Red camera data, run it through the free Red Cine software on a reasonably powerful PC, then create Quicktimes to import into Avid or FCP and start editing. No lab developing, no telecine, just convert the files and away you go. And the Time Code remains in the DV Quicktimes you create so you can easily reconform later, at full resolution.

And there is a terrific free piece of software called MetaCheater that will read the data from your QT movies, and create an Avid ALE file which means importing into the Avid is really straightforward. I was astonished how easy it was.

The main bottleneck is how many hard disks you have, and how to backup all that data (which there will be TONS of)… On a low budget feature, this could quickly turn into a logistical nightmare…'

The Guerilla Filmmakers Masterclass: The Final Chapter... Come for just £69
‘50 Kisses’... and the winner is...
George Romero dies and we lose a legend... Watch the Making Of The Classic 'Dawn Of The De...
Screen to Screen on Soho Radio with Chris Jones... A musical odyssey
Episode two of our Xmas web series goes live with 20k views!
Dust settling and super stands!
Printing the final DVD inserts