By Chris Jones on October 6, 2008 in Uncategorized 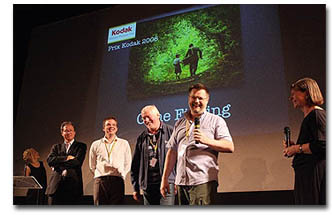 Back in London now and reflecting on Dinard. It’s a strange festival, in fact more a kind of film convention mixed into a film festival (Cannes in a microcosm), a place for new and established players in the film business to mix. It’s clearly a very important one if you want to make it in the British Film Industry.

There was the usual eclectic mix of people there, and I made some incredible new contacts with actors, young producers going places, older producers already there, and also made some new friends. It was great to also see our DP Vernon and his wife Lyn, and we spent days sat in café’s really examining the meaning of stories, life and how it all intertwines.

On the up side, Colin Firth saw the film and said that he thought it was ‘wonderful and beautiful…’ which is rather nice.

In conversation with some of the producers there, I also discovered the very strange position that film makers are now in with regard to private investment from wealthy players – film may, for some private investors, be a better investment that other companies (ie, buying shares is not a good idea due to volatility in the market). Incredible.

Those of you who watched the video blog over the weekend will know that I dedicated one screening to my old friend Mandy who lost her mum a few months back. She saw it online and dropped me this email…

…what a huge surprise and honour it was for me watching the Dinard Blog to hear you dedicate the screening to me! As you can imagine it brought on the water works, but in a nice way! Mum would have been very proud of you and what you've achieved. I'm sure she would have been there with your dad! Take care, loads of love and hugs, Mandy x

Day Of The Flowers, true Brit crowd pleaser attracts critical acclaim
Episode two of our Xmas web series goes live with 20k views!
Why Star Wars endures so powerfully... It’s nothing to do with fan boys and EVERYTHING to ...
One Create50 horror story of how a writer lost their script… completely
Announcing The Successfully Selected Writers and Stories for Twisted: Ghosts of Christmas
Tomorrow… Screenwriting Immersion Begins Online at LondonSWF365
The Dinard Film Festival
Dinard, new opportunites arise…