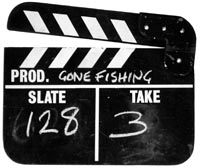 Extraordinary news! We have managed to secure corporate sponsorship for our endeavours over the next few months! What does this mean? In short, we can make sure that we attend all the big events and that we can video blog it fully. But you were already doing that I hear you say. Yes, you are right, but now we can really go for it, and it will free me to get on with more important stuff, like taking meetings at 20th Century Fox and Warner Brothers!

And remember, the coming months promise to be the most exciting, with the BAFTA's, the Oscars and the Santa Barbara Film Festival coming up.

So how did all this come about? Those of you who have taken any of my courses will know that I am a great believer that if you commit to excellence, somehow the money and opportunities will find you. I know it sounds crazy, but it’s happened so many times to me now that I know it to be true. And if you make this commitment, you also get to make something GREAT too (or at the very least learn an important lesson or lessons). So aside from the work load (and lets face it, film making is never really work, stocking shelves at the local supermarket, now that’s work!), everyone is a winner.

So… Late last week I got an email from a chap, Chris Larmour, who I had some brief communication with over ten years ago – he had also met up with Dave Hardwick, Executive Producer on my last feature Urban Ghost Story. At that time we had had a pleasant chat about film making and then went our separate ways.

Since then he has pursued an incredibly successful career in the telecommunications sector. Last week a Google search led him to my blog and he was immediately intrigued enough to re-establish contact, and offer some support for the push over the coming months. As we got chatting, exchanging emails and digging deeper, we discovered an even greater philosophical alignment, almost a meeting of minds… It was extremely exciting!

So please, everyone welcome to our stable, supporters and allies in Team Living Spirit’s ambitions for 2009, Actix.

Here’s what the press blurb says they do…

What I do know is this, Chris Larmour, the guy who contacted me and has now ‘got on board’ with Gone Fishing, really does aspire to the peak of Everest too, and his involvement and all the infrastructure and corporate might he can bring to our team is an extremely welcome booster rocket. Actually, it feels like three or four booster rockets, so we are VERY excited about this new development!

Talking about the Obama campaign's strategy to enlarge the Democratic electorate, Steve Croft of 60 Minutes asked: "How did you win states like Indiana and North Carolina?" (traditionally Republican states, that were widely considered to be unwinnable by Democrats). David Plouffe, Chief Campaign Strategist, paused and then responded simply: "First of all, we believed we could."

I now have my sights on another ‘impossible’ task with Gone Fishing. I will reveal this goal in due course, but it’s a cracker!

So, I am really looking foreword to a long and prosperous relationship with Actix and Chris Larmour.

I am supporting 'Clowning Around', are you?
How to Speed Up Your Cultural Test When Applying For The UK Film Tax Credit
How To Fund A Film... what our delegates got from it.
The Funding Documents Arrive!
Bradgate Brings Some Finance!
Appointing the sales agent
Film Festival Costs Rising…