Past LSF team creatives The Clarkson Twins and Gemma Hurley, are putting on a show…! I asked Michael to share what he had learned about breaking into comedy via fringe theater… Over to Michael… 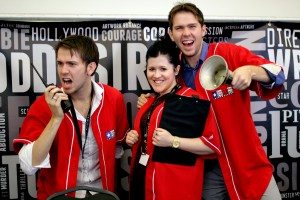 Hello there! Michael Clarkson here. If you’ve ever attended the London Screenwriters’ Festival and pitched at the Great British Pitchfest, you will have met me and my identical twin Paul in that room, ringing a bell and calling out after every 5 minutes.

After much deliberation and banging our heads against the British television industry, we decided to transform one of our feature screenplays into a fully fledged theatre production.

If you’re serious about comedy, then the Edinburgh festival is the place to have your work seen. Comedy commissioners come in droves, literally looking for that cliché “next big thing”. It is still where most of the comedy you’ll see on television today is sourced, despite the growing independent comedy web series, shorts etc that our British film making community has to offer.

So we plunged head first into the ambitious task, funding the show out of our own pockets and through generous supporters on Kickstarter (we’re currently 50% funded with 15 days to go!) only to find to our surprise that producing a play is already a million times more rewarding than producing a short film where everything inevitably depends on that one day of shooting (and it rained all day, the van broke down and the jib broke).

With Death Ship, we have been on an incredible writers journey. From the finished script, to the table read, to work-shopping with our talented cast and listening to the instant feedback of the audience opening night laughing at jokes. Here is some of what we learned…

There are only 4 more days left to catch Death Ship’s London previews at the Courtyard Theatre in Old Street (closes Sunday 30th June).

“It’s jam-packed full of gags… delivered so fast that even if you miss a few, you’re still laughing from the previous ones!”
London City Nights

And help us fund our kickstarter campaign (Today we’re 50%  funded with 15 days left to reach our minimum target of £5,000 or we don’t get a penny and the show will be severely compromised!) http://www.kickstarter.com/projects/1076673752/death-ship-666-the-titanic-parody-play

More Cash and Crewing!
How to Speed Up Your Cultural Test When Applying For The UK Film Tax Credit
Gone Fishing - the budget starts to flow in
Gone Fishing Update
The Three Pillars Of Successful Low Budget Horror Film Production
Did you know you can get 20% of your spend back for short films using the UK film tax cred...
Things I learned from Dan Brown and why he is a killer author…
Are you breaking the law by running a Crowdfunding campaign and not declaring your income?