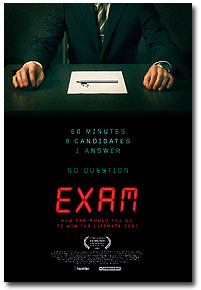 Last year I held an evening seminar with Stuart Hazeldine, UK screenwriter and now director. He has been very busy in the last 12 months with 2 films that he co-wrote being released, ‘The Day The Earth Stood Still’ and ‘Knowing’. At the time of the seminar, Stuart was in prep for his first feature as a director, a taught, single location thriller called EXAM…  (you can listen to the podcast on screenwriting here).

Over several conversations with him, Gareth the producer and Mark Talbot Butler the editor, they took me on board as an Associate Producer, to make use of all the contacts and experience Gone Fishing had given me, on top of prior experience with the features I had made. At the time they were planning on shooting HD, but after several chats and Stuart watching Gone Fishing, they switched to 35mm. And it really shows. It was a unique film in many ways, set entirely in one location and shot in story order, from page one of the script as the narrative takes place in real time, 24 style…

I was unable to attend the cast and crew private premiere at BAFTA as I was in Australia at time, but we all get the chance to see it next month as it receives its world premiere at the Edinburgh International Film Festival on June 19th as part of their Night Moves strand for genre films. GREAT NEWS!

They have a sales company on board too, Independent, and I have been helping Stuart and Gareth through sales delivery too, which could have easily turned into a very expensive and fraught experience – it was in a meeting with the sales company that I realised I needed to host a one day seminar about making delivery of a film as its such a minefield – this seminar is taking place on June 7th at Ealing Studios – more info here.

So well done Stuart, Gareth and of course Mark Talbot Butler, my crazy old mate who edited The Runner (my first feature film) all those years ago!

Here’s the EXAM sales pitch from the one sheet…

Eight talented candidates have reached the final stage of selection to join the ranks of a mysterious and powerful corporation. Entering a windowless room, an Invigilator gives them eighty minutes to answer one simple question. He outlines three rules they must obey or be disqualified: don’t talk to him or the armed guard by the door, don’t spoil their papers and don’t leave the room. He starts the clock and leaves. The candidates turn over their question papers, only to find… they’re completely blank. After the initial confusion has subsided, the candidates soon discover they’re permitted to talk to each other, and they agree to cooperate in order to decipher the question: then they can compete to answer it. Soon enough, the candidates begin to uncover each other’s background, prejudices and hidden agendas.

Tensions rise as the clock steadily descends towards zero and one candidate after the other is expelled for breaking the rules. In the course of this exam each candidate must decide how far they are willing to go to win the ultimate job . . .