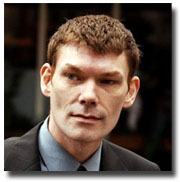 I want to let you know the extraordinary story of something happening right here and now in our own country. A few years ago, I interviewed a film maker called Janis Sharp, for my Guerilla Film Makers Movie Blueprint book,  about a micro budget feature film she had made called Lunar Girl. You can read the PDF of that interview here.

I met with her a few months later and she was very upset. Somehow it seemed her son was going to be extradited by the US government for hacking into their computers. What transpired over the next few years really does defy belief.

Her son Gary Mckinnon, did indeed hack into insecure US government systems. Why? Well there are many sides to this story, the US government, Gary’s and I guess the whole PR offensive to save him from extradition.

For me it’s this simple. Why does this extradition for an alleged non violent crime need to take place in the first place? And the US government are going for life imprisonment. Gary is clearly a young man with exceptional computer skills, and has since been diagnosed with Asperger syndrome (a kind of Autism). This to me is just crazy, cruel and to almost any sane person, a ridiculous waste of time and resources.

From what I can tell, all Gary really did was embarrass the US government by burrowing deep into what they thought was a secure system. Surely giving him a job to find weaknesses in systems is a much better use of his talents? Gary is clearly is no international terrorist, for which this extradition treaty really exists. And the consequences are very real. He could be locked away for life in a maximum security facility.

The world is going bonkers.

So, I have just signed on online petition at the 10 Downing Street website here… I hope you feel compelled to do the same.

If you want to know more about Gary and his case, there is a page here. And there ios plenty more if you google him.

His mother, Janis is a fearless and tireless campaigner. You can follow her on Twitter here. Send he a message of support, they sure as hell need it. Her film making career has been halted by this catastrophe.

Please forward this to as many people as you can.

Finally, we really do need to grow up as a society…

"Any society, any nation, is judged on the basis of how it treats its weakest members – the last, the least, the littlest." – Cardinal Roger Mahony, In a 1998 letter, Creating a Culture of Life.

How to Turn Your Followers into Doers... How I did it in my Fantasy Epic by Kate Madison
Brand Engagement Like It SHOULD Be Done Today - Learning From Bodyform
Are we killing our creativity with social media?
Are you a digital native or a digital immigrant?
Facebook and Instagram Jail… A Cautionary Tale…

Machinima Magic from Hugh Hancock
All quiete on the Cannes Front…

One Response to From Lunar Girl to Luna-cy!