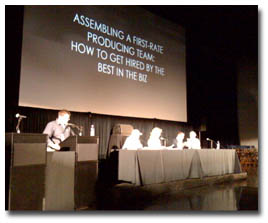 OK as promised, here is a roundup of Day 2 of the Produced by Conference. There were three sessions going on at any one time, so I could not get to everything.

The morning kicked off at 9am with a look at mobile technology as a new media platform. The basic gist is that now with personal devices like the iPhone, it is possible to deliver high quality video and other content to 2 billion people across the globe. Two things became clear. First, mobile technology is even more pervasive than the internet. Second, the internet has a culture of free content, where mobile technology has a culture of ‘paid for’ content and services. This is very interesting for indie film makers. Innovations such as mobile video headsets, new operating systems that are easy to navigate and built in projectors are changing the face of these devices. It’s certainly going to evolve as a new platform for us all to consider very seriously. I think the key is that the monetisation is built into the mobile model. All interesting stuff.

Following this was a comparison of all the major HD cameras, which was incredible and I will report on it next time on the blog (as it will be a bit lengthy). Yes they did test RED ONE and it was quite revealing.  It was also my first time in the big Carry Grant Theatre were the awards were held. Sweet.

The next session was about 3D cinema. I had already seen a 3D test on a 3D TV and was blown away, so I was looking forward to this chat. What struck me while listening was that the panel was made of about six guys, aged between 35 and 65, all looking very respectable, all babbling enthusiastically about 3d animated guinea pigs in a new 3d movie called ‘G Force’. What’s more, the audience was completely with them too. I know I mentioned this on the blog a day or so ago, but there really is a sense that the ability to Entertain (with a big E) is both admired and seriously rewarded. Most jaw dropping was the demo of Star Wars: Revenge Of The Sith, which had been ‘dimensionalised’, a process where 2D films are made 3D. They took us through how they did it, and showed how they could move and stretch 3D for effect. They could also move and stretch 3D effect for eye comfort too. There is a real attempt to keep the viewers in a similar 3 dimensional space from shot to shot, so as to avoid eye strain inbetween cuts. Of course in real life we don’t have edits in what we see, and our eyes don’t snap back and forth searching for the information to lock onto to create 3d in our brains. This is one major improvement the guys have been working on.

The day ended with a 2 hour chat with the guys from Marvel Studios, which was great fun. Of course, my mind kept swinging back to the fact that in 2 hours time, the PGA awards would be taking place, so it was hard to concentrate.

The conference was really terrific and if you are in LA next year, I recommend you try and get yourself to it.

Next time on the blog… as promised, the digital camera roundup.

Selling your movie direct on DVD...
The Force Was With Me!
Producers Guild Of America Producers Challenge Awards 2009
PGA Conference, The Digital Camera Roundup…