Please watch the clip in HD and full screen. 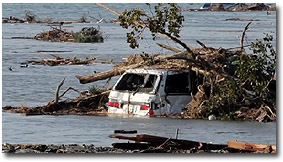 The past couple of weeks have really rocked the world. First a shocking earthquake, tsunami and reactor leak in Japan, and the start of a campaign in the middle east.

It reminds me of the fragility of life, of how we all live within the ‘myth of permanence’, that somehow tomorrow will ALWAYS be like yesterday… These shocking events serve to remind me to ‘get on with it’.

I felt compelled to share a video I discovered on DSLR guru Nino Leitners blog, filmed in Japan in the wake of the quake and tsunami. Nino invited me to add my voice to the debate both on his blog and on Vimeo. And so I commented and decided to share my thoughts here, and invite you to share your thoughts too.

The film was made by DSLR pioneer Dan Chung on the payroll of The Guardian who wanted stills and video of the events in Japan. The video here is his ‘personal’ edit.

Anytime you put one image next to another, you create a story. This film is no different. The way the camera has been used in this film is not in a traditional journalistic manner (or genre). It’s more dynamic, fluid, cinematic.

But again, this is just a choice. As is the use of music.

All the footage that has come out of Japan is telling a story of one sort or another. It’s just most use conventions we have become so accustomed to, conventions we find acceptable and never question. Shaky video, grainy images, glitches…

And I am sure some people will criticise the film maker for bringing cinematic poetry to a ‘document’. I am sure others will hail it great work that challenges convention too. Who is right?

Getting into a debate is not the point.

This is just the work of a film maker who is offering to share it with the world. It either touches you or it does not. Offends you or not. Challenges you or not. You either ‘get it’ or you ‘don’t get it’.

For me it took me to a place that no news footage has taken me thus far. For me that is why it works. I learned something new about the tragedy. I can’t explain what that ‘new’ thing that I learned is, but I know it’s there. Maybe I felt something in this film that the news footage cannot offer?

And I can only imagine the film maker also wrestled with inner demons too whilst filming it. It can’t have been easy to shoot, edit and release.

Please, contribute your thoughts and feelings to the debate.

Lessons Learned On A DSLR Drama Shoot... Day 2 Wraps
Whenever you feel like giving up, remember... Victory is close
The phone rang, and from that moment, everything changed... PART 2
How remarkable is your project?
Space Oddity: It's cool on SO many levels!
What can you expect from the Guerilla Film Makers Masterclass? Inspire, Educate and Connect…
Free film makers contracts, release forms and paperwork for your production

One Response to Art or exploitation? Reportage or opinion? Right or wrong?