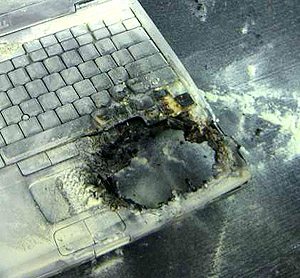 After reading the past blog on the Sony fire, film maker pal Simon Cox commented on Facebook ‘Thank god they didn’t hold the masters…’

And I have to admit it stopped me dead in my tracks.

The riots REALLY served to highlight just how quickly one could loose everything.

Computers and technology can always be replaced, but can your data, YOUR MOVIE?

We all know we should back up our work, but it falls into the dentists, gym, opticians category… ‘yes I will get round to it soon…’

Honestly, if your house burned down now, would your project fully survive that disaster? Most of us still save data locally on a hard drives or memory sticks which is vulnerable to loss.

I am great fan of DropBox, which if used for all your smaller data files such as scripts, invoices, photos etc., should provide a pretty solid backup system (yes I know, what if ‘DropBox’ went under yada yada…)

But what of those whopping video files? For instance, 5D media is big, a feature film could easily run into terabytes or data, but a film shot on Red One, let alone Red Epic, well we are talking massive data quantities.

Just remember… EVERYTHING you do is contained in the picture and sound files…. Your accounts, your script, your directing, your website, your social media, your catering… EVERYTHING is tied up in those very fragile masters.

And don’t kid yourself… I know of at least one film maker who lost everything in a burglary. Gone. Forever.

So when planning your next shoot, PLEASE PLEASE PLEASE don’t skimp on data backup. At the VERY LEAST, keep one copy in the cutting room and another in a wholly different geographic location.

The same goes for master files and tapes. I shudder to think what would have happened had distributors stored their master video tapes at the Sony warehouse.

Yes, I know we film makers SHOULD have backups and clones of our masters, so that a fire wouldn’t be a catastrophe. But years down the line, do you really know where they are kept? Ask yourself right now, that movie you shot three years ago… do you know where the files are? The masters? Are there at least two copies / clones in two separate locations (and really that should be three copies in three locations)?

Insurance will cover many things, but it will never bring back a film or footage should you catastrophe strike and you don’t have backups or clones.

Right… time to do a backup my computers!

Summer Scars, DVCProHD Feature In Post...
Which email service should YOU use to stay in touch with your group?
Channel Four News comes to visit me…
My 5D mkII film finally released online… watch here

One Response to Could Your Film Survive The Sony Warehouse Fire?