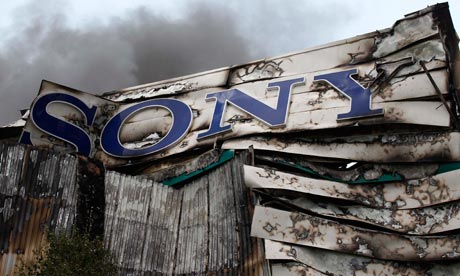 Guest blogger David Wilkinson of UK Distribution outfit Guerilla Films, tells us about the longer term impacts of the riots and the fire at the Sony distribution warehouse.

What was I to do with 1,400 DVD’s of RABBIT ON THE MOON a British/ Mexican co-production that were only selling 4-5 copies per year? I asked that question to my sales force only last week. The problem was resolved in a devastating and unexpected way when on Monday rioters in Enfield torched the Sony DADC warehouse.

I am sure part of the rioters motivation was that Sony is was a giant corporation who they believed ‘deserved it’. What they did not know is that every UK independent film and DVD distributor used Sony to warehouse and ship their stock, around 60 companies. Coupled with this were almost 200 Indie record labels who also stored their CD’s in Enfield.

To give you an idea of the scale of the Sony warehouse, some years ago, 2,000 units of one of my films were accidently lost in the warehouse. I was so perplexed that I went to try and find them myself. After two hours I gave up – even though 2,000 DVD’s would fill a bedroom, it was like trying to find a needle in a haystack.

I returned on Wednesday with a CNN news crew to carry out an interview. One of Europe’s largest warehouses was now nothing more than a ruin of buckled metal and the ash of 25 million DVDs/ CDs and Games with the flames still roaring some 60 hours later.

Although all of us are insured, the insurance will only cover what was lost. When a distributor releases a DVD, they will make more than is needed for the initial release as the cost of ordering extra disks is low when ordering in volume. This is why we have a warehouse to hold stock in the first place. But if all of those disks sell out, or are destroyed in a fire, making a new batch is very expensive. While I could do that, with DVD a dying medium and only one high street retail store HMV taking my films (I had 49 retailers taking my films ten years ago), I would never cover the costs of making these new disks of my back catalogue, let alone make a profit to pay out to film makers.

So I am now forced, sadly, to delete 27 British film titles from DVD sale including Chris’ ‘White Angel’ and ‘Urban Ghost Story’.

And it is not just me, so many of my fellow distributors are also forced to take the similar measures.

In conversation David has also told me that many distributors may go bust as they simply cannot survive this catastrophe. As for me and my films? Well we are already planning a whole new re-release campaign, but online using new technologies such as iTunes and Distrify. While this is a bitter blow, I wonder if in the years to come, this terrible event will be recognised as the catalyst that put disk based distribution in the past and moved us all into an online distribution future?

DVD Cover printing - How to do it
Nothing is constant, except change… The death of Prime Video stores
Subtitles for Festivals
London Riots… the aftermath for film distribution
Filmmakers and writers, grab your About.Me URL now

2 Responses to Will British Film Rise Like A Phoenix From The Sony Warehouse Fire?