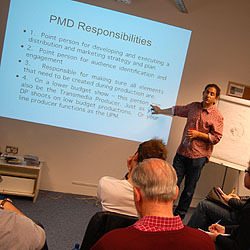 I asked Jon Reiss, who is running the Distribution Masterclass this weekend to give me some pointers about distribution in 2012 as many filmmakers had been asking me – the most salient point I think is his first, that Self Distribution is NOT about putting DVD’s in bags, it’s about collaboration with industry, be it other distributors, broadcasters, aggregators… If you want to come to the 2 day workshop this weekend, you can get £50 off with the discount code CHRISJONESBLOG – sign up here www.DistributionMasterclass.com

1. “I don’t want to self distribute”
Self distribution is not self distribution. It is not DIY. I am known as the “DIY guy” because I wrote a manual to help filmmakers distribute their films. However in that book I stress that distribution and marketing is about collaboration and partnerships. I prefer the term Hybrid Distribution. You as the filmmaker manage the process but you engage various entities to do much of the actual distribution for you: digital aggregators, DVD companies, online shopping carts, fulfillment companies, television broadcasters, bookers, publicists.

This still involves work – but not as much as doing everything yourself, which I only recommend as a fallback. Partnering with companies extends your reach tremendously and there are more and more companies forming every month for you to help you. American: The Bill Hicks Story is a wonderful UK example of this http://www.americanthemovie.com.

2. “I don’t need to worry about distribution – a company will buy my film and do that for me.”
Unfortunately the world has changed. Estimates range that 35,000-50,000 new feature films are made every year. Less than 1,000 get onto the international festival circuit. And only 200 get into Sundance. Of those, last year only 20 made deals starting in the low six figures. If you multiply that by 5 sales markets worldwide, in a good year, 100 films out of 50,000 are making deals starting in the low 6 figures. All rights distribution deals don’t exist anymore except for the lucky few. This is part of the reason why the Sundance Institute started Sundance Artist Services (http://www.sundance.org/artistservices/), to help all of the films who had been in the Sundance Film Festival but never received distribution. Around the world broadcast licenses are decreasing and film fund revenues are shrinking.   However the world rewards entrepreneurial spirit and creative energy.

3.  “Distribution and Marketing is something I can worry about later – right now I need to focus on making my film.”
Filmmaking used to be only about making films. Now filmmaking has 2 parts – making a film – and connecting that film to an audience. It is what I call the new 50/50. But this is not a sequential process any longer. The earlier you start engaging your audience the more successful you will be in achieving your goals.  Full stop. The process will also be more organic – since you will involve your audience in the process of making the film and as a result they will be invested with you and your project.  A good example of this is Iron Sky (http://www.ironsky.net/)

4.  “If I think about my audience I am selling out.”
A better way to think of this is: You are not changing your film to pander to the market (that usually results in failure anyway), instead you are connecting your film with the audience that already exists for your film.

However by thinking of the audience in advance perhaps there are elements that you might include that will aid in financing or marketing. For instance the documentary “Ride the Divide” received sponsorship from some of the manufacturers that supplied clothing to the endurance bikers featured in the film.  This way the film benefited from considering the larger audience with no sacrifice to the creative spirit of the film.

Taking this one step further, it is better to know in advance that your film might have a very small audience – since then it would be best to keep your expenses low in creating the film (if you need to be concerned about recouping your financial investment). Better to make a film for less than be saddled with a mound of debt later. Even further if you have £100,000 to make a film, better to spend £50,000 on making the film and £50,000 on connecting that film to an audience.  You will be far ahead of 95% of other filmmakers.

5.  “I am not a salesperson, I am an artist.”
Well that may or may not be true. Many great filmmakers are also salespeople. It takes sales skills to sell your film to actors, financiers or anyone else to believe in your film and get involved. Most successful directors in the traditional Hollywood world are “good in a room.”

In the new model of artistic entrepreneurship (which musicians have been engaging with for a number of years now) artists need to think more and more creatively about making a living. Look at the products on OK Go’s website (http://okgo.net/special-things-store/collectibles/)

In the spirit of collaboration (see #1 above) I recommend that films have what I have termed a Producer of Marketing and Distribution (or PMD) on their team to be the person on their team to spearhead audience engagement (which is what I call distribution and marketing). Since nearly half of the work of filmmaking (if not more) is distribution and marketing and since distribution companies cannot in any way handle the glut of films that are made every year, filmmakers need a PMD as much as a DP, Editor, AD, Line Producer etc. The earlier filmmakers recognize this, the more they will achieve their goals and the happier they will be.   This concept has already been embraced in the UK: Sally Hodgson is the PMD for Sound It Out http://www.sounditoutdoc.com/, Ben Kempas is the PMD for The Scottish Documentary Institute (http://www.scottishdocinstitute.com/) and Dogwoof (http://dogwoof.com/) has started being a PMD for select films.

Don’t be one of those filmmakers that I constantly encounter who say “I made a film, I’m in a mound of debt, I’ve been in a ton of film festivals, and no one has bought my film and I don’t have any money or energy to do it myself and I don’t have anyone to help me.”

Start early, plan for it, engage and embrace the new world.

All of these concepts and more I will be covering in my 2 Day Distribution Master Class this weekend in London June 23, 24 – sign up here www.DistributionMasterclass.com

Thanks Jon, and remember, you can get £50 off with code CHRISJONESBLOG – sign up below. 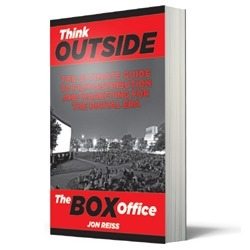 PS – Every delegate of the Distribution Masterclass will get a free digital copy of Jon’s book, ‘Think Outside The Box Office’. You can load it onto your phone, iPad, computer or print it out and bring it along – I am sure Jon will sign it for you! The book is 364 pages of crammed tips, tricks and strategies that will open your mind to a world of possibilities for your film. Best of all, as soon as you sign up, we will send you the book!

HMV and Blockbuster deserved to fail
Are you a digital native or a digital immigrant?
How to run your own micro theatrical release in London: Case Study
How I Got My Feature Film On Amazon Prime and How Much I have Made
What ONE thing MUST you get right in your next film?
Demystifying Distribution: Real World New Distro Case Study Strategy and Tactics
Why are some film makers resistant to getting involved in distribution?
How to make a DCP (Digital Cinema Package) on your own computer