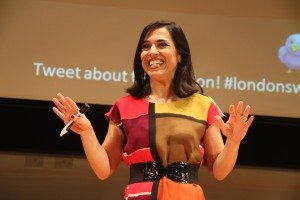 One job I work at tirelessly at the London Screenwriters Festival is taking photos.

Stills are essential when conveying the experience a delegate can expect at the festival. Of course we have several official photographers who do great work, but I am so determined to compliment their work by getting my own killer shots too. And so I am often seen perched on the edge of the stage, snapping away like a crazy person.

Films are no different – they also require killer images to ‘sell the experience’ to the viewer BEFORE they commit time and money to watching it.

It’s a cliché, but a picture speaks a thousand words.

And often it takes a thousand pictures to get the one killer image! Hence the value of experienced photographers.

International Sales Agents repping films, especially low budget films, routinely lament the lack of good stills to support the project. When I speak with them about current trends and issues, it still comes up as one of the top five monumental problems they face when selling low budget flicks.

So what stills should you get when making a film? Here’s my list of what I would try to ensure that I didn’t go home without, and my top tips on how to get them.

NOTE: All stills are taken from my own work, ‘Moon’ and ‘Winters Bone’ as all are achievable on lower budgets.

Always give them the few moments they need to get the shots YOU will need to sell the film. If your cast resists, back up your photographer.

And in these moments, understand you will want to move on, saying we will get the shots later… which of course you probably won’t, and then you will pay the price when trying to sell your film a year later. So get them right there and then.

UPDATE – If you liked this, I added a post on the best way to share your killer shots – it’s no use having GREAT images if no-one uses them because they can’t get them easily READ HERE.

Digital Archiving… 35mm Negs and what we can learn from Scanning The Past
Top 6 things you should do to share your stills with the online community, journalists and...
Ten Technical Mistakes That Can Ruin The Stills For Your Project
Stills For Your Movie… what you MUST get
How Actors Can Radically Improve YOUR Script
It’s not that shit happens, it’s how we deal with it that defines us