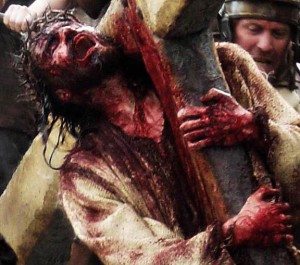 Mel Gibson’s brutal and deeply felt telling of the biblical tale of the crucifixion of Christ is a fascinating and apt documentary for today – in some ways its a horror movie, certainly a a torturous gore fest and a little bit unhinged.

Irrespective of your own beliefs though, it remains a masterclass in passionate filmmaking, in understanding and connecting with your market, and of personal courage. Consider that meeting when Mel said ‘no, it’s not in English, it’s in Aramaic and Latin’. Now that’s a committed filmmaker!

I know that the making of ‘Apocalyto’ was similarly insane too.

You don’t need to believe in God or even like Mel, but blimey and ironically, he behaves like a possessed filmmaker and we can all be inspired by that.

Meet Jamie Benning, creator of 'Filmumentaries'. We LOVE him!
Stunning trilogy of Star Wars documentaries... lose an entire weekend!
Something for the weekend? Editing Masterclass with Walter Murch
Welcome to MY 'Guerilla Film Makers Handbook'.... circa 1989! The making of 'The Evil Dead...
Something for the weekend? Screamography with John Landis
Successful Crowdfunding Old Skool: Raise money for your film by posting letters through people’s doors!
Top ten Winston Churchill Quotes EVERY Filmmaker Needs To Hear