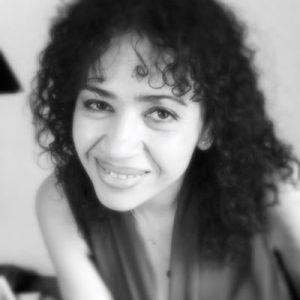 For a writer, getting a script produced can be a major hurdle.  In my early writing days I completed my first feature script and armed with naivety, I attended a networking event in London in the hope of collaborating with a filmmaker and … well… hoping… for good things to happen to my script.

I soon learnt that perhaps I should have written a few low budget short scripts and networked with those projects first.

So, a few short low budget scripts later, I found it still wasn’t easy to get those produced. Many filmmakers I met were filming their own scripts and simply didn’t have the time to film someone else’s script. “You should film it yourself…” I was advised over and over. 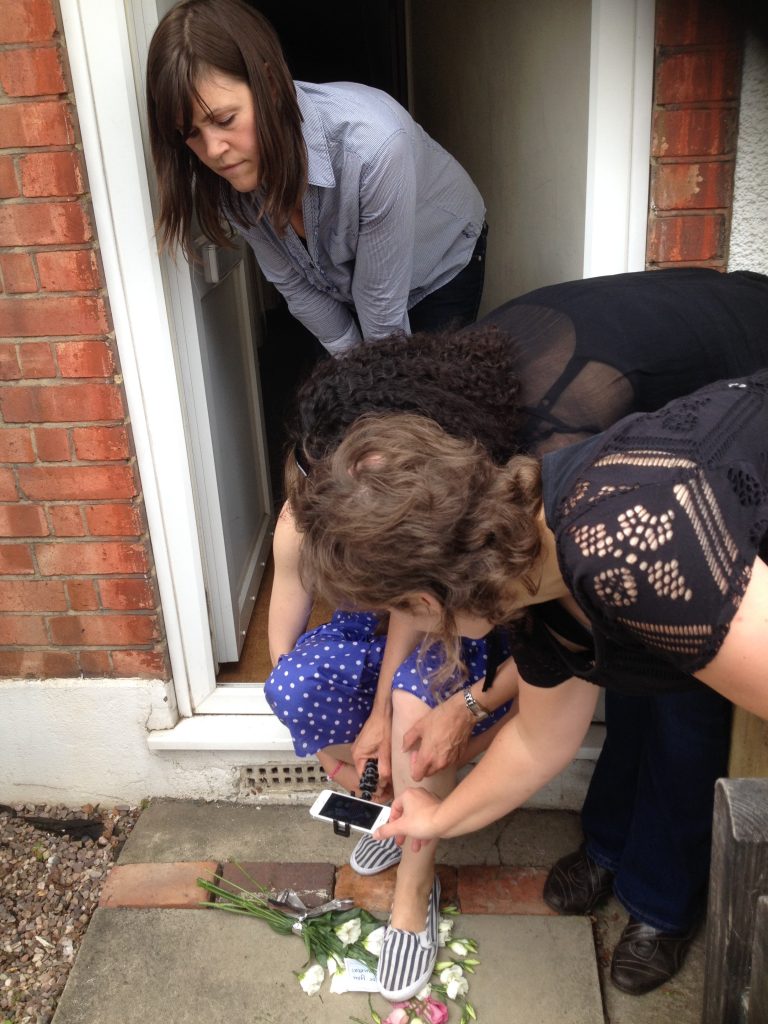 Later, I heard about ‘Tangerine’, the low budget feature film shot fully with an iPhone 5s. That planted a seed. My own personal phone was an iPhone 5s. I mulled over the idea of shooting a short film myself.

With that idea on the back burner, I attended ‘The Breaking into Script Reading’ two day course taught by Lucy V Hay.  The last thing I expected was to come away from it with a commitment to make a film with two ladies I sat between on the first day of the course. This was the first time I met Kate Nowakowski and G Rockk.

The final push of making that commitment was fueled by Chris Jones, filmmaker and author of the Guerilla Filmmakers Handbook. He gave a motivational inspiring speech, on harnessing the inner Wonder Woman from within ourselves, pushing our boundaries and making that film.

Feeling empowered and together with our combined determination, myself, Kate and G, brainstormed the initial ideas for the script during the networking drinks later that day. We decided we would shoot on my iPhone. We felt the iPhone was suitable as it would enhance the close and personal tone we sought for the narrative we had in mind.

Within six weeks we had a story, a low budget script, auditioned for a cast, prepared a shot list and did a recce. The day before the shoot we recruited a small crew at the Guerilla Filmmakers Masterclass. It was a gamble that paid off as we shot the film over the next 3 days. 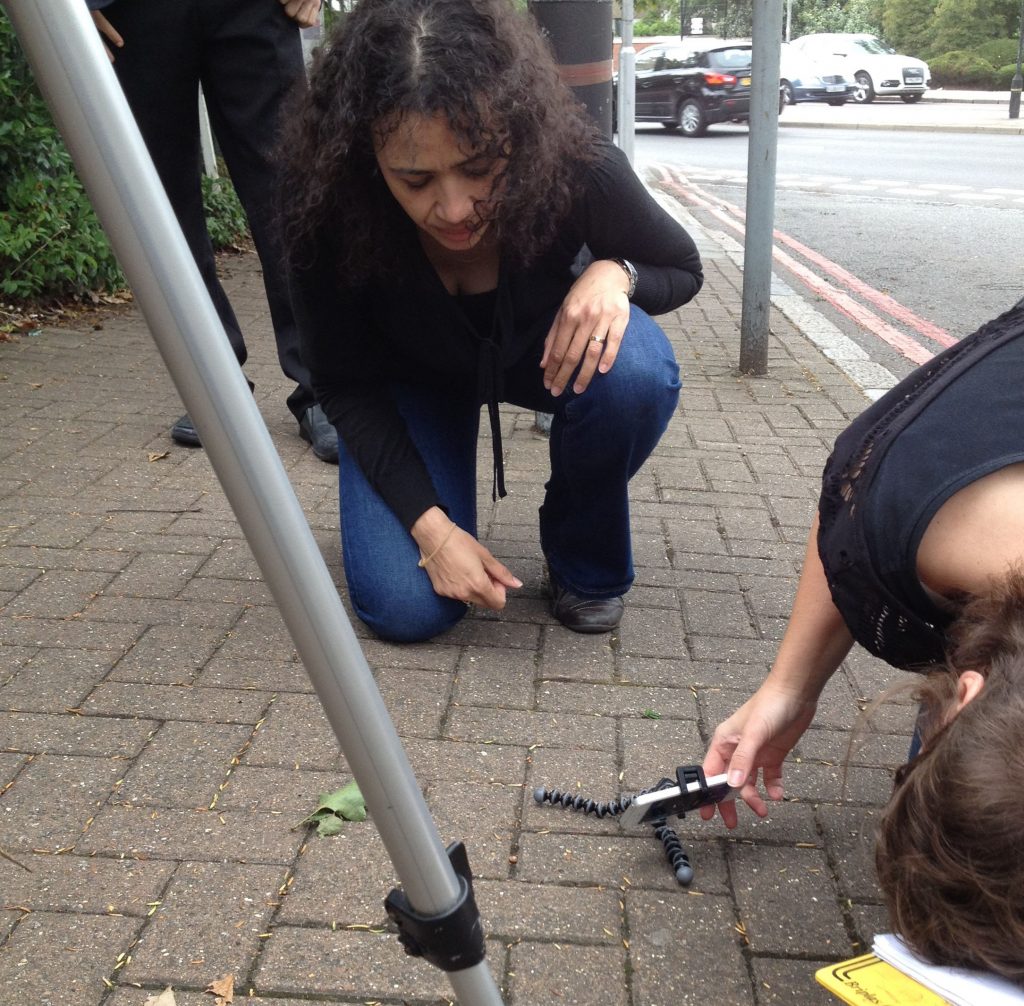 Five things I learned shooting a film on an iPhone 5s

1. Its inexpensive
It cost just a few £s to download the Filmic Pro app on my phone. I borrowed a smartphone 360 degree adapter to mount the iphone onto a borrowed tripod (that networking DID pay off). I soon discovered the wonders of using a gorillapod, which was very useful for close to the ground shots.

3. It’s inconspicuous
Due to it being, well a phone, an iPhone works well for guerrilla filmmaking! Just film and go.

4. Getting close and personal
For close ups and extreme closeups, don’t use the zoom feature! Physically get up close and personal (and keep that resolution). Great if your actor is fine with it as it can get a bit intense. We got great quality close ups – and this intimacy WILL create a different and often more intense performance.

5. Storage space and battery power
As we only had the one iphone 16GB, we had to download the footage regularly while charging the phone. So I recommend having more than one iphone or one with a lots of storage space. Plan your shots well! And a carry a portable charger! 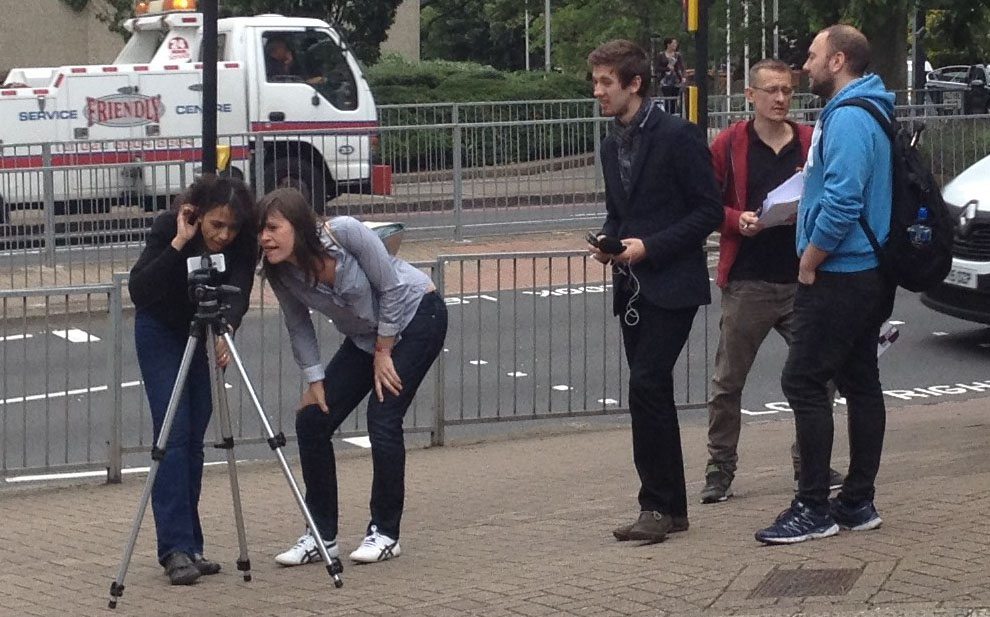 We are now in post production and looking for a composer – if you are interested, drop me a line. I hope these tips from a writer turned filmmaker has helped. The whole experience has been empowering and I fully recommend you consider your phone as a tool to get your film produced now.

Thanks Dana – if you want to chat about composing music for her film drop me a line and mail@livingspirit.com and I will forward your message to her.

Shooting With Drones: Ten tips for filming astounding footage on a shoestring
Micro Budget Film Making Law Number 8… Get A Single Shooting Location To Fulfill Multiple ...
Why we should all be embracing smaller film budgets and innovating
Watch inspirational dance film shot over two years, umpteen countries and with four genera...

‘Only the valiant should create, only the daring should make films’
Celebrate with us at the London premiere of ‘Seeing Him’