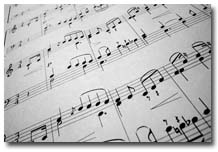 Music is always a vital element of any movie, and I have often felt that it’s all too often used to prop up dodgy drama. There is that great Alan Parker cartoon that says something like, ‘the script is terrible, actors incompetent, director an idiot, editing is terrible – right we’d better fire the composer!’

I have been looking for music for Gone Fishing and right now we are trying to get a track by Philip Glass. However, one of the people who has contributed to the budget is also a composer and he has written some music for the film just off his own back, having had a brief email chat with me – and you know, he isn’t too far off the mark. We are not going to use this as is, but it’s a possible step in the right direction, and I thought you might be interested in hearing it.

The composer is Philip Martin. Who knows, Philip may end up doing the score. Right now he is actually at the top of the list, ahead of Philip Glass (though we do hope Mr Glass will respond, in which case he will of course slip to the top of the list immediately). Philip is living proof of one of my main life philosophies in that taking action always creates results.

Low Budget Horror… You should use the Shepherd’s Tone to ratchet tension in your soundtrac...
Live on stage with Thin Lizzie - parallels with the film industry
Writing The Score for Escape From New York
Yesterday, Polish composer Wojciech Kilar died
11 Steps Required to record your score with an orchestra in Macedonia – a Guerilla Masterc...
Urban Ghost Story, the making of... And the complete soundtrack by Rupert Gregson-Williams
Location Moves To Scotland
Storyboarding Gone Fishing