This was supposed to be our final day of shooting, but it was now clear that we needed an extra day. Many people in the cast and crew chose to come back for the extra day, but some had other work they needed to do. I was touched by the enthusiasm everyone showed, especially those who could not make the final day but really wanted to do it. We had to get a new crew, and so producer Ivan Clements, who we now referred to as The Ivanator, hit the phone and started filling positions.

This was also the day we had set up to shoot the high speed camera stuff – shooting with special cameras that could run up to 2200 frames per second – you can see a sample shot of what we got here. This was all handled by second unit. Of course the problem with high speed is your shooting time is often a few seconds, so you need to time it right. 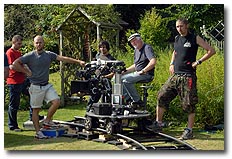 Main unit went back to the location where Old Bill lived, and we shot in the back garden. DP Vernon Layton spent a great deal of the time looking at the sky, and waiting for the ideal sunlight. I was amazed at how long this could take, but seeing the results, it was well worth the time we spent. On balance we were very lucky with the weather and rumours began to circulate that perhaps, just maybe, Vernon could somehow control the weather too. This was amplified when Editor Eddie Hamilton saw the rushes and commented that it looked like we had shot in Africa, the light was that amazing! 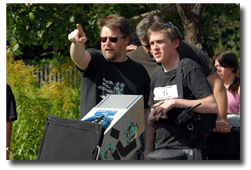 This also gave me the chance to grab my ‘director’ photo – ruthless media tart that I am. Pictured here with 1st Ad Jonathan Andrew.

Also, the stings I received on my leg the previous day were now starting to hurt and by the end of the day, when we were shooting in a small church up the road, I could hardly walk. I rolled up my trouser leg and was horrified by what I saw! They had become seriously infected and my leg had swollen to almost double its size.  I knew I had to carry on, so I just limped through the day. Everyone asked if I was OK, and as long as I kept moving, I knew I would be fine.

The last shot of the night was with casting director, CathyArtons’ son, Harry, who is also my godson. It took an age to draw out a performance, and I was reminded again of just how ambitious this film is.

By the time I got home I couldn’t walk at all. It took me ten minutes to get up the stairs to my flat. And for the first time I wondered if I actually did need to go to casualty…

Only one day to go…

After years working in the real world finding my life rushing past me faster and faster, i...
Day Of The Flowers: Ten Tips for shooting in the heat and humidity abroad
Shooting Day Four
The Final Day Of The Shoot…