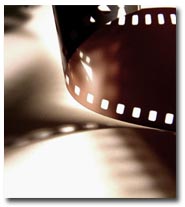 Last night was the first truly dark night on this production. It was HELL!

Yesterday we got word from the lab that the negative had been misplaced. No-one actually knew where it was. It was frankly, LOST!

That fact was further complicated by it being late in the day and after six, everyone went home. Nothing could be done until the next day.

I called the lab at eight pm and spoke to a really helpful chap in despatch, and he went through records to assure me that the negative never arrived. This meant it was a problem with the couriers. This kind of thing has happened to me in the past, and also to producer Ivan Clemments, but as much as your experience tells you it will all be fine, your guts are churning. All you can think is, if it is lost, all of that time, money and energy will be lost. I slept well last night, but that had much more to do with the half bottle of wine I downed than the lost negative!

This morning though, the neg mysteriously re-appeared. No-one would admit how, or take any responsibility. Both the Labs and Midnight Transfer (who were doing the telecine), worked tirelessly to sort this out, and in fact, it’s clear now that it was a courier mistake and nothing to do with the labs or MT. I assume it was always sitting at their depot until someone said, ‘what’s that?’ and sorted it out.

So it's all fixed now. Crikey. Like I didn’t have enough headaches.