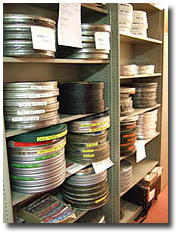 Last night I collected the camera negative for ‘Gone Fishing’ from Midnight Transfer, who digitally conformed and graded the movie. This brings up one of the hidden problems that always needs dealing with when you make a movie. What do you do with all the stuff? 35mm neg is big and heavy and there were 11 large cans that now need archiving. In reality, I may never ever use them again as the film is now digital.

But… Who knows what the future holds. Maybe in ten years time, all films will be reconstructed in 10k res, or converted to 3d? I have learned to never discard all your ‘elements’. In feature length production, you may go back and resurrect a scene because Japan wants a movie four minutes longer! I know of two low budget feature films where this happened.

I have also made three feature films and I have had to deal with all the ‘stuff’ those projects generated. Right now in my hallway I have three enormous boxes with 60 BetaSP tapes from the last film, Urban Ghost Story. My plan is to copy these all onto around 10 DVCam 180 minute tapes with timecode. These tapes are a telecine of the rushes, and again, probably will never be used… but who knows. All I know is ten small DVCam tapes are better than 60 whopping great beta tapes!

As we move digitally, so stuff gets smaller and easier to archive… but that also makes me a little nervous too. For years I have archived all my stuff digitally and every so often, as hard drives get cheaper and bigger, I move the archived data onto new, larger drives. I just moved all my features (which were digitised as uncompressed Avid projects) onto a single 750gb external USB2 drive which cost £100. I still have loads of space left too… But my worry is the drive failing in the future. So now I really need to think about cloning the data so it’s also stored else where too… but we are talking about 100’s of gigs of data. It goes on and on…

As an interesting footnote, senior grader John Clause at Midnight Transfer told me when we worked on Gone Fishing, that Chris Nolan, (Batman) still insists his neg is cut in the traditional way and then scanned. He does this so there is a master neg copy, where most films now just get scanned and remain a mountain of camera negative. It seems that even in studios, storing this stuff is a problem as the camera neg gets ditched once digitised. From that day onward, the film can never be restored from the original camera neg, The digital files are all that exist. That’s why I am still filling my hallways with big silver cans!

The week from HELLLLLLL!
Making HD BluRay at Home and FAT32