By Chris Jones on October 24, 2007 in Contributors, Funding 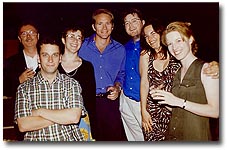 Great news! Executive Producer David Hardwick has come onboard Gone Fishing, adding to our coffers. This is particularly good news for me as Dave has now invested in every single film I have made! He should be given a knighthood as a patron for the arts! The pic here is taken in Cannes a few yeas back, with (from left to right) Dave Hardwick (now EP on Gone Fishing), Simon Cox (second unit director on Gone Fishing), Claire Trevor Roper, Jason Connery, Me (Chris Jones), Carmen Dyer and Genevieve Joliffe.

So how did Dave get involved in the first place? Well, Dave met my brother in a lift in Germany many years ago, they got to chatting about the films I had planned, and Dave then got in contact with me and subsequently involved in each and every one of our films.

Best of all, Dave has also introduced another Executive Producer to Gone Fishing, Manu Uppal of the Net-link Group.

In between films, Dave has also been pursuing a music career, and you can hear some of his music here.

To date, we have now raised somewhere in the region of £21k, leaving us only a couple of thousand short of our target which I am now convinced we will achieve.

How to Speed Up Your Cultural Test When Applying For The UK Film Tax Credit
The Accounts For Gone Fishing Are Done!
Did you know you can get 20% of your spend back for short films using the UK film tax cred...
Six Lessons I Learned Making My First Feature
How to get your film funded using the EIS, SEIS and UK film tax credit, podcast with Ivan ...
Gone Fishing First Press!
Compiling Clips for the Gone Fishing Course