By Chris Jones on November 9, 2007 in Post Production, Sound 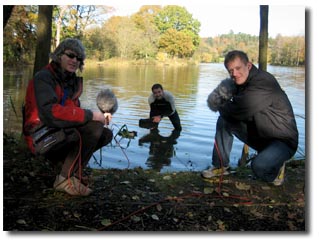 Today we spent a cold session back at Bury Hills Fisheries recording sound effects for the enormous killer pike in Gone Fishing. Senior sound designer Bernard O’Reilly and two of his team, Barnaby Smyth and the extremely brave Stuart Bagshow (seen here in the water) generally thrashed around in the water, stomped on wooden jetties in wellies and jangled chains, recording it all for the film.

They recorded everything at 96khz, which means that they have twice as many samples per second as is needed for the final mix, which theoretically means they can slow sound down by 100% without loss of quality (film sound when you hear it is usually at 48khz, which is half of 96khz). It’s a bit like shooting slowmotion picture then playing it back at real time speed, but having all that extra information available should you want to slow things down again. Cunning. 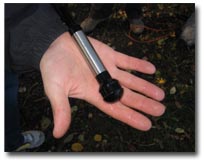 They also used an underwater microphone, a hydrophone, for those extra special underwater sounds. They assured me that this was a new development for them, they were more used to a microphone taped up in a condom! Blimey.

Top Ten Things To Consider When Mixing The Sound For Your Film In A Professional Dubbing T...
Nine ways to create a world class sound mix for your film
11 Steps Required to record your score with an orchestra in Macedonia – a Guerilla Masterc...
Dragons, Reapers and Guerilla Filmmaking: Turning Writer to Director With My First Short ‘...
Dolby Licence is secured for 35mm prints of Gone Fishing
Sound Mixing your film: Top Fifteen Tips For Working With The Professionals
Producer Ivan Clemmenst AFM report 2
Making A Bigger Worm…