By Chris Jones on January 6, 2008 in DVD, Post Production, Sound 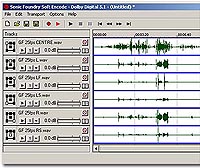 Now the final mix is complete, I wanted very much to listen to it in Dolby Digital at home, on my own 5.1 system, as well as start the process for making a DVD of the completed film once everything else is done. The only problem is that I left the final mix on Friday with a copy that is saved as 24bit, 48khz WAV files, six of them (one for each channel), all recorded at 24pfs. I needed to convert them to a single AC3 Dolby Digital file, which I believe is at 16bit and 48khz, and as the final picture transfer onto DVD will be at 25fps, the sound is also currently running 4% slow for that DVD.

The short answer to this problem was that I used, for now, a 24fps version of the film which inserts an extra frame every second, so that it’s running time is that of a 25fps version (though ever second the picture ‘bumps’ as a frame is repeated). I then used a program to ‘mux’ the sound from 6 discrete (separate channels) into a single encoded file. I used Soft Encode by Sonic Foundry, and it took all of five minutes to encode it. On balance, it was pretty easy.

I then took that AC3 it into Adobe Encore and used the ‘plop’on 2 (that’s the beep on the leader at the head of the film) to sync it up with the picture. Again, it worked fine and when played back, my DVD player recognised the Dolby Digital stream and my amplifier separated the tracks and sent them of to the correct speakers – left, centre, right, left surround, right surround and sub woofer.

I chose to shoot ‘Gone Fishing’ at 24fps, mainly to have the experience. I have always been an advocate of shooting at 25fps if your budget is low, and frankly, I am still an advocate of it. It seems to me that there are several technological hurdles when shooting at 24fps, with no real benefit to the end product. Certainly shooting at 25fps has no impact whatsoever on the final consumer or any potential distributor or broadcaster (if this were a feature film for instance). For me, choosing 24fps (when you have a low budget) is a matter of misinformation or zealous puritanism.

Of course we will have to see how HD pans out, and if 24p does start to dominate in the home and on broadcast, then that will change things… but I am not holding my breath. I believe that sadly, PAL and NTSC, are her to stay for the foreseeable future. HD had it’s chance at one world format, and it blew it.

Anyway, at least right now, I can watch ‘Gone Fishing’ with an offline cut at 24fps and hear the amazing soundtrack we produced last week at Videosonics, and experience it in all it’s acoustic glory.

How To Record Your Own Foley Tracks At Home
11 Steps Required to record your score with an orchestra in Macedonia – a Guerilla Masterc...
Sound Mixing your film: Top Fifteen Tips For Working With The Professionals
Dragons, Reapers and Guerilla Filmmaking: Turning Writer to Director With My First Short ‘...
Nothing is constant, except change… The death of Prime Video stores
Dolby Licence is secured for 35mm prints of Gone Fishing
The Final Mix Is Complete! And it sounds AMAZING!
More Creative Issues…