By Chris Jones on November 2, 2007 in Post Production, SFX, Sound 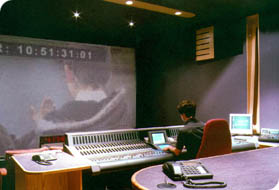 Now that the picture edit has been locked, we have entered a waiting game for the final picture mastering, sound edit & mix, and the visual effects. We have got top people and companies working on all three aspects, but as they are all at the top of their game, and as we are not paying, we have to slip in between big paying jobs. So we are forced into a waiting game.

VFX company Men From Mars have been choka with two big features, St Trinians and Mutant Chronicles, and they hope to get to us soon… I have broken the VFX into two parts, ‘hard’ and ‘not so hard’. Last week I was contacted by a Gone Fishing contributor who is also an After Effects guru, and he offered to deal with the ‘not so hard’ shots. His name is Russ Wharton and I hope to be able to post an update with some of his ‘before’ and ‘after’ clips soon. Russ lives up in Wales and so I just posted a DVD with data on it. Let’s see what comes back from him.

On the picture conform front, Midnight Transfer are also busy, but I think we will get in there before the end of the month. To speed things up, I am going through making the EDL for them (in CMX3600 format) so that if they get a free afternoon, they can at least scan the neg into the system (the neg is still stored with them). I have a feeling the neg will still be a bit dirty and may need a further ultrasonic clean at The Film Clinic (who have already done some great work for us). We will see.

On the sound front, things are moving very well. Senior sound designer at Videosonics, Bernard O’Reilly, is spending the afternoon in his studio, messing around with the fishing props to see what cool sounds he can create. We are striving to create a film with a truly extraordinary soundtrack, and Bernard is one of the best guys in the country for the job. We are so very lucky to have him! I can’t wait to hear what he cooks up in his accoustic cauldron!

Sound Mixing your film: Top Fifteen Tips For Working With The Professionals
Dick Smith, legendary makeup artist has died, his legacy for me, cannot be underaterd
Dolby Licence is secured for 35mm prints of Gone Fishing
How To Record Your Own Foley Tracks At Home
11 Steps Required to record your score with an orchestra in Macedonia – a Guerilla Masterc...
How I made a SciFi Epic Film on a shoestring... Making KIDDO
Senior Sound Designer Starts Work On Gone Fishing!
Producer Ivan is at the American Film Market