By Chris Jones on December 26, 2007 in Contributors, Grading, Post Production 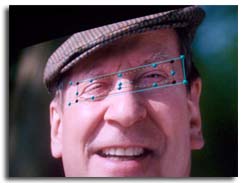 Now I am more recovered from my ‘Xmas bashing’ food poisoning bout, I have been reflecting on the final grade for ‘Gone Fishing’. I have been amazed at how much effort and high-end technology goes into these final stages, and I am very pleased that I made every effort during script development to ensure that what was on the page, was worthy of the entire production effort, including these enormous final post production stages of sound and picture. As senior picture grader John Claude at Midnight Transfer said to me during the grade, ‘There is nothing more disappointing than trying to polish crap… and it sometimes happens…. but thankfully not that often for me so far…’ It’s a reminder to us all to always be at the very top of our game.

The tools for picture grading are so powerful, and so multilayered, it’s true, you can almost relight a film in post production – though clearly it’s better to get it right on set and then augment it in the grade. I loved that way that John and Vernon would place new shadows in shots, would add sharpening to ‘eyes only’ and then motion track that effect through the shot. Or how would select a certain shade of green and add saturation to that colour only, boosting that Kodachrome Summer look…

Another very cunning grading trick was to select some shadow area in the distance, and raise the blacks slightly, giving the impression of ‘atmosphere’ between the focussed subject in the foreground, and out of focus background. This increased the ‘long lens’ look, giving it an even more cinematic feel.

I know it all sounds quite simple to the Photoshop generation, but to see it work with these HUGE files, all in real time, and see the subtle enhancements, kind of blows your mind… And I am no newcomer to Photoshop! As I said, it made me feel very happy that I was never apologising for the narrative, as the script was very solid before we took it to set.

Steve Payne, one of the contributors to ‘Gone Fishing’ sat in on the grade… here’s what he had to say…

'What a difference a grade makes! I had the pleasure of spending a couple of hours in the offices of Midnight Transfer in Soho watching some of the colour grading for Gone Fishing and I have to say I was blown away by what the techno wizards can do with a 2K DI version of the film. To sit in a dark studio with large screen projection and see how the skill of the grader and the critical eyes of Vernon (the DoP) and Chris scrutinised and matched every shot to produce beautiful and consistent images was an education indeed. This is a process I had long been waiting to witness and I have to say it was amazing. There is not enough time to talk about the wonders of motion tracking or vignettes (or even to pretend I understand them), suffice to say they are part of the modern day magical process of post production. It was exhilarating to witness. Amongst other things, this is going to be a visually beautiful film to watch. Thanks Chris.'

I am about to compile the last few shots for VFX guy Russ Wharton, and then figure out just how I am going to get them all to him in Wales! I would use YouSendIt, but we are talking many Gigabytes there and back.

Dragons, Reapers and Guerilla Filmmaking: Turning Writer to Director With My First Short ‘...
Grading The Impact with DaVinci Resolve
Colour Grading Your Film – Top Nineteen Tips For Working With The Professionals
Picture Grading… The Final Day…
Prepping the premiere!