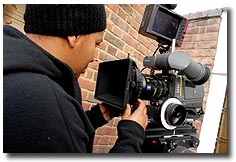 It’s a disaster… but not for us.

My good friend and director, Johnny Newman, shot a film (At Home With The Finkels) late last year using the Viper Camera – a high end HD format that records data to drives and not to tape (or obviously film). That means there is no tape or film to hold in your hand at the end of the shoot, it’s all stored as digital data on hard drives – and huge ones at that, roughly 5TB of data for this film. And we all know what can happen to hard drives. Yes, you guessed it, the post production facility accidentally deleted some of his master shots. That’s the original material. Gone. Forever.

But what about backups? Well the data sizes are so huge on the Viper format, that making a backup becomes hard work for an indie film maker. It’s fine for Spiderman 3 or Zodiac, both sot on Viper, but not so good for cash strapped film makers. Sure you could do it with, say, five 1TB USB 2 drives from PC world, but it would take a whole weekend to backup using that cheaper but cost effective solution. 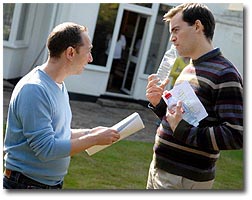 So what’s going to happen now? Johnny has no choice now but to get his cast and crew back and re-shoot. He is gutted. I just spoke to him and he said, ‘I was very excited about Viper, it was all working really well, but I was always nervous about possible data loss – and now it just gone, vanished, never to be seen again. I don’t think I will be shooting a tapeless or filmless format again in the future.’

Eddie Hamilton, editor, said ‘that’s why in Hollywood people still shoot film, it’s been around for 100 years and is very robust.’

On reflection, it reminded me of one of the commandments in The Guerilla Film Makers Handbook, ‘Thou shalt shoot every shot twice…’ (creating a backup). This commandment is fine for tape or film, where due to it’s linear format, if a problem does occur, it tends to only damage a few moments of material (like if a tape snags in the deck). It’s not that simple with data, as it tends to be whole lumps that disappear if deleted, or everything if a drive fails. Data loss tends to be catastrophic where tape or film damage tends to be smaller and more fixable.

I think you just need to remember that shooting on an HD tapeless format is not like shooting HDV, that data files can just be so HUGE. This doesn’t bode well for the much anticipated Red Camera which also uses drives to store media.

I guess the other thing to consider is – be completely responsible for your own material. Even if they say, ‘don’t worry’, you should worry, and you should make sure you have a recovery plan. On Viper for instance, you could transfer to HDCamSR as a failsafe (which I believe should have happened on Meet The Finkels, but it didn’t).

Summer Scars, DVCProHD Feature In Post...
Day Of The Flowers: Ten Tips for shooting in the heat and humidity abroad
After years working in the real world finding my life rushing past me faster and faster, i...
Archiving BetaSP tapes onto DVCam…. Problems
Final DVD – death and resurrection!