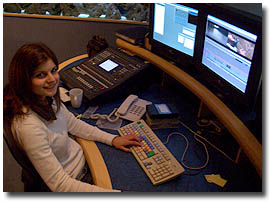 I spent most of yesterday working with an editor friend of mine, Laura Kettle, in a large post production facility in West London. We had a number of jobs to do on ‘Gone Fishing’, first of which, was re-laying the newly mixed soundtrack onto 2 HDCamSR tapes.

After some messing around we managed this fairly easily.
Then I needed to make some new versions of the film on HDCam, that's not HDCamSR… HDCam is a lower spec format and much more accessible than its expensive big brother. So to make full HD digital screenings cost effective, we needed Gone Fishing on HDCam…. And that’s when the fun and games began.

Getting the film onto HDCam at 24P (24 frames a second) was fairly easy, BUT… 25P (25 fps) and 23.97P (which is slightly slower speed than 24fps, but converts very well to NTSC) were both a pain and after a lot of messing around, we had to abandon. So now I have to find a new way to achieve these two different versions. And as usual, with no money.

One problem I have is that I need the HDCam tape to carry the full surround sound mix, and HDCam only has four audio tracks (not enough for the 6 tracks needed for uncompressed Dolby 5.1) – so you need to encode the audio into a dual track format called Dolby E (where a box takes six tracks and converst it in to a data stream, a little like how Dolby is delivered on DVD, but much less compressed)– and they guys who are doing that for me can only do it easily at 25P, not 24P…. And the tape I have is 24P! Typical!

I am sure there is a way around this, but again, I am reminded that while all this new technology is great, it also increases the amount of hoops you need to jump through, almost exponentially. And it’s all really new, so no-one is a real veteran of the format yet. Anyone with six months experience or so is considered a seasoned expert!

At the very least though, I now have two HDCamSR tapes, in full 4:4:4 colour sampling, with the full six track mix at 48khz and 24bit… And I also have a 24P HDCam tape that I can hopefully find a way to get the Dolby E mix transferred onto.

I really do understand why people abandon projects in post, saying, ‘You know what, that will do…’ but I am nowhere near that point yet!