By Chris Jones on February 3, 2008 in BluRay, Film Production 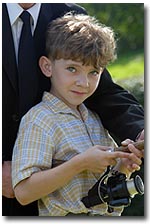 Last night, editor Ediie Hamilton came round to my flat to watch the directors cut of Kingdom of Heaven that I had rented on BluRay from Amazon (it's an improvement over the original cut for sure as it makes sense and does not feel rushed). It stopped playing three times as we watched, due to minor scratches on the disk surface. This is something that DVD doesn’t do unless it’s a bad circular scratch. For me, it’s another reason why consumers won’t buy into HD on a disk. It just isn’t bullet proof in the way DVD is now.

Eddie also brought a short film with him that we watched. It was very well produced and an excellent piece of narrative film making, with a great story twist halfway through. But, while watching it, I realised something. I have seen many short films over the years and there are some common themes that crop up regularly. Many shorts tend to be quite ‘grown up’, with adult themes, relationships, and very often, they are set in ‘the city’ where the film makers live. All of this makes sense from a production perspective of course. But it can tend to make many shorts blur into a single – especially at a festival where you might see 50 or even 100 short films.

It occurred to me when I reflected on ‘Gone Fishing’ that I had, perhaps instinctively, certainly not consciously, avoided that scenario. ‘Gone Fishing’ is not in any way about people in the 20’s or 30’s with grown up issues or relationships, and it’s also set in the wilds with not a hint of urban backdrop. It’s also not serious or dark in the way many other shorts are, though it is sincere and touching.

It’s an interesting distinction for me, as one of the things I set out to do with ‘Gone Fishing’, was to be in every way I could, different to what everyone else was doing, to stand out. And I think this story and scenario distinction, while not consciously engineered, is in fact present and is definitely helping.

We made an Xmas movie and you can watch it now...
And it was all going so well... Or was it? Filmmakers, Screenwriters, Creatives... Are you...
The BBC College Of Production podcast on 'budget film making'
How to best use library music for your film – top 8 pitfalls to avoid
14 Things I Learned Making An Epic Fantasy Feature Film On A Low-Budget
Making HD BluRay at Home and FAT32
PROOF OF CONCEPT! IT WORKS!