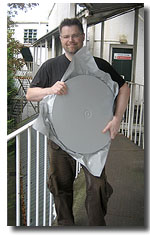 Yesterday I had a really excellent screening of Gone Fishing at Theatre 7 at Pinewood Studios, with some guys who may be able to help open some very BIG doors in LA and the USA in the run up to the Oscars. More on that in due course.

It was also a chance to view the 35mm print that I will be FedExing off to LA in the coming weeks, to go to the Academy for selection. Can you believe I am actually sending a print of the movie to the Academy Of Motion Picture Arts, with a credible attempt at getting nominated for Oscars? It’s quite extraordinarily exciting, not just for me, but for everyone involved who I have spoken to about it.

Sam Clark from Kodak also came by the office yesterday, to drop off part of the prize for the Kodak awards – 6000’ of Kodak Premiere film stock for three new prints of Gone Fishing. What was fascinating is that this stock comes in whopping great rolls that are vacuum packed in plastic, not metal tins like stock that goes on set for shooting. And of course, it’s incredibly heavy.

I will be dropping of the stock at the labs next week, and the subsequent prints will go off to BAFTA (for the BAFTA awards) and other festivals around the globe. We need to keep a close eye on prints as we only have a limited amount and 'print traffic' as its called could end in a jam if we suddenly find we have three festivals at once, and only two prints…!

Short film opens doors in LA for Brit Film Maker
How Getting Involved In A Community Film Festival Can Inspire You As A Film Maker
What materials do you need to enter a film festival?
The debate rages on... What value is there in Art Film?
Canon 5D MkII versus Film in the real world… the result?
Crossing the first threshold…
Oscars Research…