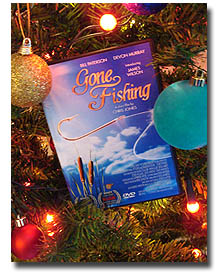 I am attempting to get the Gone Fishing DVD out there for Christmas and have set the INCREDIBLE target of selling 1,000 DVDs! This will fund the final Oscar push in January. I just emailed out to my user group, but if you read this, please consider sending it out to everyone you know too. You can load the page here and forward the link…

After Xmas, I will let everyone know how many we actually sold, so if you are planning it with your movie next, you will have some real world statistics…

So here is the email I sent.

GONE FISHING on DVD, the perfect Christmas gift for just £10… Read on

Last year, film maker Chris Jones led a dedicated group of film makers as they set out to win the Best Short Film Oscar in 2009… It was a lofty goal, but incredibly, with a little help from you, they may just pull it off!

The film is a true David and Goliath story called Gone Fishing, only this time it’s not David, but Old Bill, and Goliath is the biggest pike ever caught, set in the nostalgic world of yesteryear summertime, a Kodachrome place we all fondly remember… Already this family friendly flick has won plaudits from critics, celebrities, juries and most importantly, the public… And the response is always the same, WE LOVE IT! Check out the trailer here!

Unable to secure funding from the film industry, the film makers decided to ask every person they knew to get involved and donate a little money – astonishingly, £22,000 was raised to make the dream a reality, and enough to attract stars like Devon Murray from Harry Potter and seasoned Brit actor Bill Paterson. The incredible cast is matched by a world class crew too, with seasoned pro’s happy to lend a hand.

The film was premiered earlier this year at the British Academy of Film and Television Arts in London, after which it won the Kodak Awards and the all important Oscars qualifier film festival, Rhode Island in America. The Oscar nominations are announced on Jan 22nd, and right now, Gone Fishing is in the running.

Now is your chance to buy an extraordinary Christmas gift for someone special.

Gone Fishing will be a wonderful family film to watch on Christmas day, and with all the extras, it will keep you entertained for hours. The DVD’s are signed too, and if you buy a copy, your money will be used to help with the Oscars campaign push… Just think, if we do win the little gold chap on Feb 22nd, YOU WILL HAVE HELPED US GE THERE!

You can buy Gone Fishing on DVD, region free, here…

What people are saying about Gone Fishing….

‘I bought the DVD for a friend and they have watched it over and over – the kids really love it too! Now we are all waiting to cheer when it wins an Oscar!’’’
Sara Morrison, London

‘Must see’ film for the year, 10/10 for a Christmas Present!
David Bowen, Hove, East Sussex.

‘Buy it, see it, believe in the dream!
R.K.Demetriou, Cairo

‘Chris Jones’ wonderful little movie encapsulates love, nostalgia and a side of home I just hope they get to see at the Oscars…’
Oliver Williams, London

‘A rare gem- something grand children and grand parents can enjoy together.’
Martin Gooch, London

‘A beautiful film and an amazing Christmas gift that has touched hearts all over the world’
Kerry Finlayson, Los Angeles

DVD Cover printing - How to do it
Nothing is constant, except change… The death of Prime Video stores
Subtitles for Festivals
And the award goes to…
The Bahamas Film Festival Starts Tomorrow…