First off, can you believe, we won another festival. While in the Bahamas, Gone Fishing also won the Barbados Film Festival. I am waiting for the organisers to send me more details and hopefully some photos. 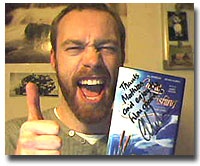 I thought I would share some comments I have had, both at the Bahamas International Film Festival, the Oscars and the Christmas DVD push for Gone Fishing…

What a day this was… just the perfect time for your DVD to arrive! :)  Excited I threw it right into my DVD player and got to watch "Gone Fishing" again before the football match.

Just like at the Oldenburg film festival where I saw your movie for the first time, "Gone Fishing" lightened up the whole day! And I´m very glad that now I have the chance to make me feel like this again in just 13 minutes watching this movie :)  I send you a picture of me right after opening the envelope with the movie in it 🙂 THAT´S how exciting people get because of your movie ;). So thank you very much, Chris! Go on to the Oscars! Greetings from Germany,
Mathias Wagner, Germany 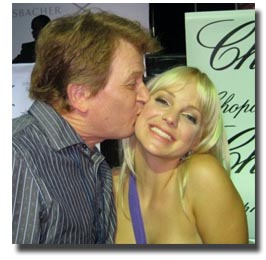 WOW!  I loved your movie.  It was moving, gorgeous, cast with great talent and – okay…. here it comes -  Left me with a tear in my eye.  Really well done and moving. I'm glad the theatre was dark so my manhood (insert joke here) was not compromised by the tears.  Thanks so much for making the film…
Michael Afendakis, Director, Delta Rising
http://www.deltarising.com
(From Bahamas FF, pictured kissing actress Anna Faris)

I'm not alone in being touched and inspired by your journey. Perhaps my personal story can put into perspective the extraordinary effect you are having on countless  film-makers.

Two years ago, whilst walking on a beach in South Wales, my daughter encouraged me to return to my first love….. making films. I was 47. As a teenager and student I had spent hours making super 8 short films and then arranging public screenings attended by hundreds. After graduating (in science) my first job was as an assistant to Martin Benson at his small film company in Radlett making corporate 16mm films. But I gave up early on the industry because of pay and what followed was a relatively successful career in marketing and advertising…. until that walk on the beach.

It was your three books, especially your documentary one, and then the documentary weekend that led directly to me setting up my little company Jump Off The Screen with some initial successes and with some larger dreams. Thank you.

And for the last 2 years I have constantly been helped by dipping into your incredibly sharing and generous blog. I've been a silent reader, not directly supportive I'm afraid, but having now watched Gone Fishing I wanted to pass on my massive congratulations to you for creating such a lovely viewing experience which I was able to share of course with my family. I so much wish you further success with it.

Whatever happens with the Oscar, this film is a massive achievement at so many levels…. We can count on you to keep us fully in the loop.  With every best wish

This movie really inspired me on so many ways. As a filmmaker student and as a person I feel highly touched by the simplicity of this story and how Chris and the rest of the crew brought it together. The slow pace on the beginning and the heart-beating feelings that takes us on a journey until the end have really made me cry and wish it never end. It is like I know the characters for so long… And technically speaking I can say: Well Done Chris, Eddie, Vernon and Ivan the Ivanator!!!! You are THE GUYS!!!!!!
Carlos Guedes, Brazil

Top Ten Tips For Making A Contract, a Film Makers and Producers Guide
Space Oddity: It's cool on SO many levels!
Well that happened...! Blood, guts and glory at Guerilla Film Masterclass
And it was all going so well... Or was it? Filmmakers, Screenwriters, Creatives... Are you...
How Filmmakers Consistently Climb Mount Impossible... Four strategies to get you on set
Email from the Oscars!
Watching Past Oscar Shorts on DVD

2 Responses to Gone Fishing Feedback from the DVD, Bahamas and beyond…